The sight of the mini-cruise ship Hebridean Sky at Pier 23 resulted in a flash-back to the 1970s and 1980s. 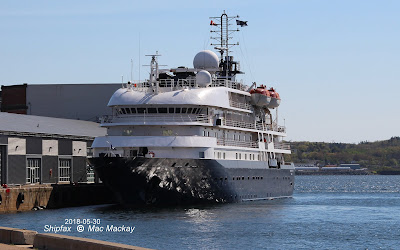 Although owned by a company called Noble Caledonia, the ownership in fact is vested in the legendary Salén family of Sweden. Their company Salén Ship Management, has the technical and hotel management of the ship and its two sisters. This latest company to use the Salén name was founded in 2009, however the name has been associated with ships since the early 1900s. Its blue funnel with the white letter "S" was once one of the best known in the world. 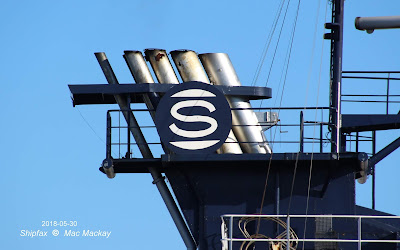 Sven Salén founded a shipping company in 1915 that eventually became one of the largest in Sweden, owning shipyards tankers, oil rigs, but principally refrigerated cargo ships. Saléninvest AB, as it became, was synonymous with the reefer trade, and its ships and the many that it managed for other owners, often called in Halifax and frequently at Pier 23. 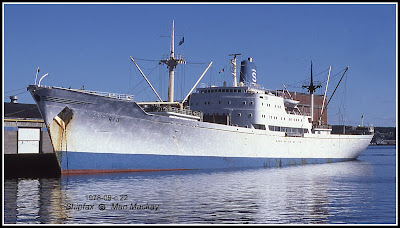 The 1960 built Rio tied up at Pier 23 in September 1978 to load squid for Japan. It was built for Salénrederierna A/B as Antigua by Oresundsvarvet, Landskrona and although renamed Antilla in 1972 and Atlantide in 1977, it was still managed by Salén and wore their funnel mark in 1978. It was sold again in 1979 becoming Rosy then in 1980 as Safina Reefer for Saudi owners. It was broken up in 1983 at Gadani Beach. 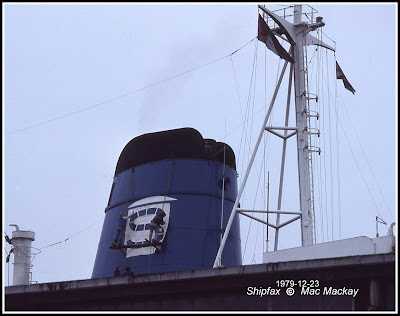 Crew members apply the Salén funnel mark to the Port Line reefer Port Chalmers at Pier 27. One of  the largest refrigerated cargo ships ever built, it had fallen on hard times when containers began to make inroads into the UK /  New Zealand trade.

Salén managed the ship for a time until it was sold in 1981 as Manaar with parent company Cunard taking over management. It became Golden Glory in 1985 but was laid up until sold for scrap in Shanghai in 1985.The 21.5 knot ship was built in 1968 - the second last ship built for Port Line and the last ship built (Hull No. 700) by Alexander Stephen + Sons, Linthouse, before the yard became a division of Upper Clyde Shipbuilders. Sister ship Port Caroline was Hull No.1 at the re-named yard and the last ship built for Port Line. It shared the title as largest refrigerated cargo ship ever built.

When the Israeli owned Maritime Fruit Carriers company went bankrupt Salén took over management of many of their ships. They were also Pier 23 callers bringing in fresh fruit. 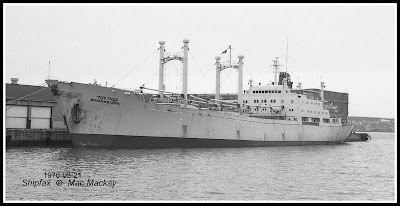 Bananacore, with its name spelled in Hebrew and English characters on the bow, docked at Pier 23. It had arrived with the first cargo of the season - possibly tangerines or citrines.

Salénrederierna A/B the shipowning arm of the company continued to build ships to its own account. Among them was the splendid Snow Ball (one of several ships with a Snow name). 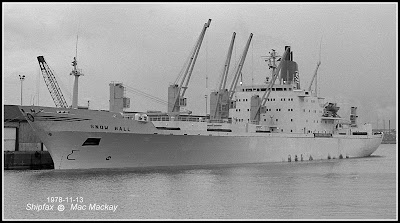 Chantier navale La Ciotat built the 14,512 grt Snow Ball in 1973. It had no less than seven subsequent names before it was broken up in Chittagong in 2006.

Salén also had ships built in Swedish yards, including San Bruno at Eriksberg in their home town of Goteborg in 1967.

San Bruno also tied up at Pier 23 - the shadow the grain leg falling across from pier 26.

In 1983 the ship became Malayan Venture under the Philippine flag, but arrived in Shanghai for scrap in June 1985.

Salén formed a 50/50 joint venture with another Swedish company, Rederi AB Transatlantic, to build this 8023 grt reefer at Eriskbergs in 1965. Initially named Arawak it was managed by Salén. When it called in Halifax in 1979 Salén had bought out RABT's share and renamed the ship Altcar and sold it to Greek owners, retaining management at least for a time. 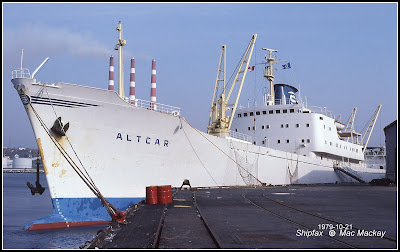 Altcar at Pier 9B displays a bulbous bow that was added in 1970 and the Salén houseflag, funnel and bow crest.

The ship was laid up in Borneo in 1983 and arrived in Kaohsiung for scrap ion July 1984.


Departing from the usual white colour for reefers, Satsuma had a sort of putty colour. The former Satsumacore was built by Bergens MV in Norway in 1970. 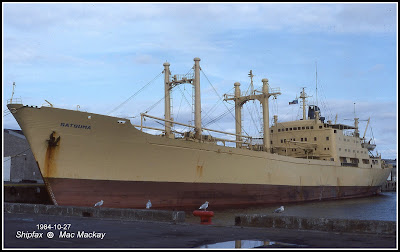 A few feathered spectators view the Satsumacore optimistically at Pier 34.

The ship had a variety of managers for owner Intermare KG Kuhlschiff Gmbh until 1988 when it became Copacabana Reefer. After a fire in Piraeus in January 1993 it was sent to Aliaga for scrap.

Satsumacore may have been the last Salén ship to call in Halifax. On December 19, 1984, when a plea for a state and bank funded bail-out failed, the company declared bankruptcy. It was then history's largest shipping company collapse with the operation of 140 ships* (most under management) , employing 2,100 people.

Remnants of the reefer fleet joined Cool Carriers. That company still exits today, but has gone through numerous ownership transitions over the years (including Leif Hoegh, J.Lautitzen / SAF Marine, NYK and Baltic Reefers)  and currently only operates 17 ships.