The multi-purpose cargo ship Rosaire A. Desgagnés returned to the Canadian flag today after a winter trading under the Barbados flag. This has been a yearly routine for the ship ever since it was acquired by Transport Desgagnés Inc in 2007. The Quebec based company runs a large northern supply operation working out of Cote-Ste-Catherine and other Canadian ports.

Built originally for the Beluga Shipping fleet of Germany as Beluga Fortification it was a member of large fleet of similar ships, built by Jiangzhou Union Shipyard in Ruichang, China and equipped with movable tween decks and heavy lift capability. It is a 9611 grt, 12,744 dwt vessel with two 120 tonne capacity cranes that can work in tandem. Desgagnés announced the acquisition of the ship in June 2007 and it loaded its first arctic cargo in August of that year. At the close of the short arctic navigation season in the late fall it was chartered back to Beluga and re-flagged to Barbados. 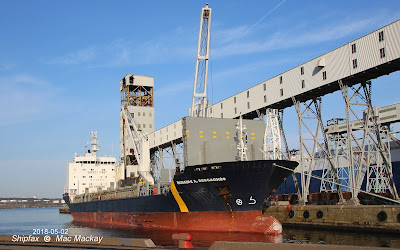 Rosaire A. Desgagnés at pier 25, with large hatch covers open. The covers are reinforced for heavy deck loads and the three holds are box shaped for ease of cloading.

The Beluga company eventually failed amid fraud allegations, but Desgagnés was able to find other operators to work with and the ship has consistently found overseas work each winter, trading world wide.
Desgagnés has gone on to buy several other ships of the same or similar class, some with larger capacity cranes, but all well suited the northern supply work. The ships carry general cargo, containers and vehicles  and their own lighters and tugs to land cargo in remote communities.

Halifax is a convenient port for the reflagging and maintenance period before the ships load for the north. Fleet mate Zélada Desgagnés did a similar reflag in Halifax in June 2016.