Asian Sun out AS Felicia in at Halterm

This afternoon Tropical Shipping's Asian Sun sailed just as ZIM's AS Felicia was arriving. This was likely an arrangement that allowed for efficient use of line handlers on the pier, but also it took place during shift change time, meaning that work would start on AS Felicia at the beginning of a shift and complete before the end of the shift to avoid overtime.

Both ships have been mentioned and photographed (after a fashion) here before.

AS Felicia is one of two ships, along with Arsos, that ZIM is now using as a weekly feeder shuttles on what they call the  Canada-Florida Express. The ships will shuttle containers from Halifax via US ports to Kingston Jamaica for loading on larger ships. 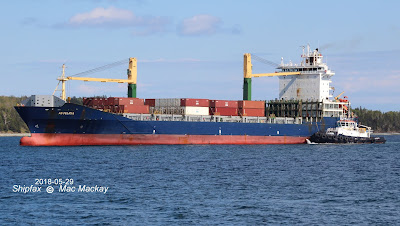 Tropical shipping operates Asian Sun along with Bomar Rebecca on its Caribbean service from Halifax to Palm Beach, FL with most ports in the Caribbean served directly or by feeder. Tropical is a heavy user of refrigerated containers (painted white) for both import and export. 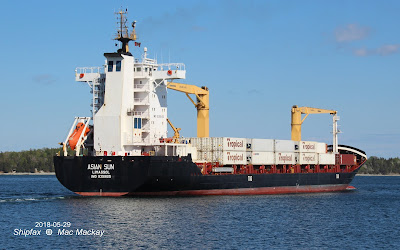