There was activity at both ends of the harbour today.

In south end off Halterm, McNally Marine began to mobilize for its dredging contract. The tugs Mister Joe and J.F.Whalen moved the Derrick No.3 into position off the end of pier 42. One of the mud scows has also been moved from pier 9 to pier 23, which will be the operational base for the work. 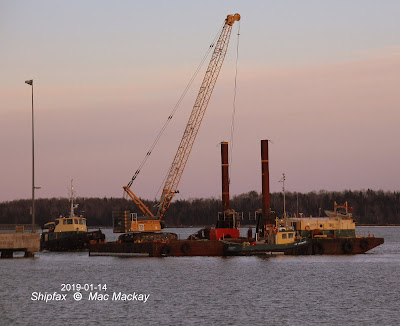 The dredging is the first phase of the pier extension and is expected to take at least two months. A second phase is to build the concrete cribs that will be sunk in position to form the pier. 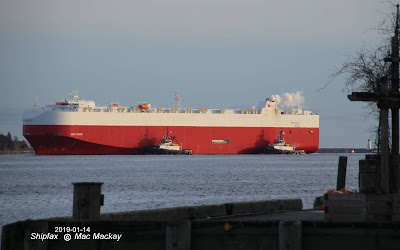 The tugs Atlantic Willow and Atlantic Larch shepherd the ship around Ives Point.
(Atlantic Larch is temporarily assigned to Halifax while Atlantic Bear is in Saint John assisting with the LNG tanker Pan Europe.)


The ship has been calling here since its maiden voyage. See Shipfax July 21, 2017
With a capacity of 7,000 cars,  it is one of the larger autocarriers.

Moving from the southend piers to anchor in Bedford Basin, Onego Rio passed in and out of the late afternoon shadows from waterfront buildings.

The ship arrived January 6 and unloaded a cargo of rails at pier 27. This what I said in my January 7 post:

" Onego Rio  is a 7576 grt, 10,300 dwt ship built in 2003 by Damen Okean in Mykolayiv, Ukraine. It carries a pair of 80 tonne capacity cranes."
Since there is no severe weather in the immediate forecast, the ship is likely waiting for orders.
It will join another ship that is waiting for orders, although the orders may be well known: 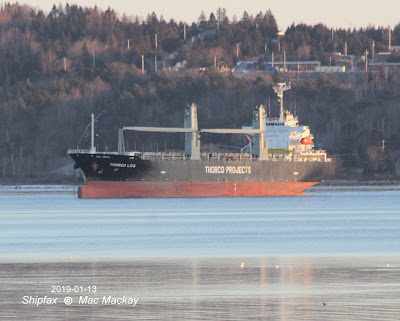 Thorco Liva will likely be heading for Newington, NH to load fibreoptic cable, and is just waiting for the a date to be there.

At pier 9C in the north end, beside the usual crop of suppliers, Trinity Sea at 9C and Horizon Enabler fueling at 9, the tug Atlantic Enterprise appears to be getting some repair work to a window in its winch house. A piece of plywood has been hastily applied.

Atlantic Enterprise picked up a coating of frozen spray on its trip up from New Jersey, and perhaps a broken window in its winch control house.

For more on the tug, see: Tugfax January 13

What its role will be in the Yantian Express is a bit of a mystery. SMIT has dispatched another tug from Rotterdam. Sovereign is due at the ship Tuesday, joining fleet mate SMIT Nicobar and Maersk Mobiliser. Sovereign is well equipped for fire fighting with dual water/foam monitors.
.
Posted by Mac at 10:33 PM