As THE Alliance scrambles to make up for the port calls missed by the Yantian Express fire, there was the rare sight of two ships on the same line, in port at the same time.

Two ships on the same line at Cerescorp, Fairview Cove this morning.

Dalian Express (a sister ship to Yantian Express) is on its regular routine for the EC5 service, having called here westbound January 13. It is now on the return leg eastbound, having picked up its own allocated cargo at US ports, and presumably some that was intended for Yantian Express.

Docked directly ahead at Fairview Cove is Shanghai Trader brought in to take up Yantian Express' eastbound cargo. Although remarkably high in the water, the ship appears to be close to capacity. That would indicate that a large proportion of eastbound containers are empties headed back to Asia. 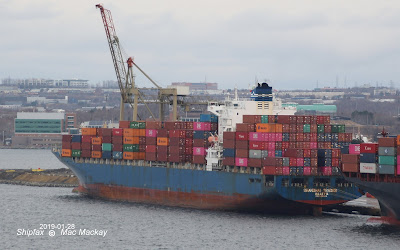 There did not seem to be any cargo handling going on, but there was quite a bit activity at the dockside with truck cranes.