Fire has broken out aboard Hapag-Lloyd's container ship Yantian Express en route to Halifax from Colombo in the EC5 service. Due to severe weather conditions, the crew has suspended fire fighting operations. This is certainly a perilous situation. In view of several recent fires aboard large container ships, cargo fires are very difficult to fight even in good conditions and can take days or weeks to control. However there is little to prevent the spread of fire, particularly on deck, and if not contained quickly can race out of control.

When a ship is far offshore and away from external resources it is difficult to predict how the situation may evolve. There is only sketchy information available at this time, some conflicting, but most news sources agree the fire erupted Thursday, January 3, northeast of Bermuda in a container on deck and none of the 23 on board had been injured. References to the ship being 1200 km (648 nautical miles) off Halifax are not possible to verify without expensive satellite technology.

On May 20, 2013 Yantian Express made its way to Bedford Basin en route to Fairview Cove for the first time. 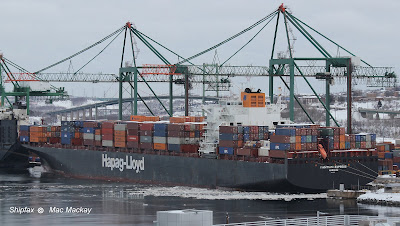 When Yantian Express called here on March 17, 2015, the port was still cleaning up from a 70 cm snow fall. It was not until March 21 that the ship was able to complete its work.

A photo taken by a crew member and posted on line shows flames erupting from the top of a container a few bays forward of the bridge. The ship has reportedly turned out of the wind to keep the fire away from the accommodation block.
.
Posted by Mac at 5:39 PM