The geared bulker Federal Ruhr made an over night visit at pier 26, and sailed this morning at 0800 hrs AST, in dense fog. While the ship's bow was visible, the stern was not, but the name was readable! 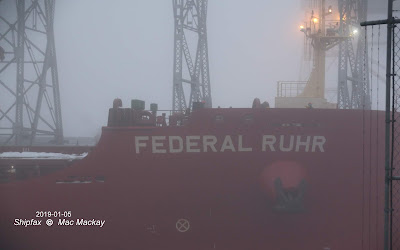 The ship is one of three built in 2016 and 2017 by The New Times Shipbuilding Co Ltd in Jingjiang, China for Fednav's Great Lakes trade. Federal Alster (2016), Federal Mosel and Federal Ruhr are Seawaymax size (199.918m x 23.753m), and 22,947 gt, 36,754 dwt. They are multi-purpose dry cargo ships with box shaped holds, and are fitted with four 36 tonne cranes that can use grabs. Fednav charters the ships from Canada Osiris Shipping Ltd, and they are managed by Intership Navigation of Cypress. 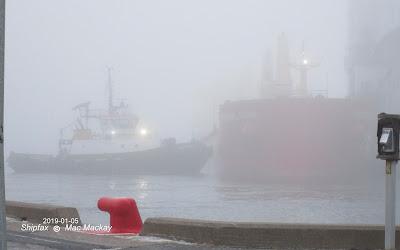 Atlantic Willow nudges up in the bow of Federal Ruhr as it prepares to sail at 0800 hrs this morning.

The usual trade of these ships is to bring in steel products, and take away export grain. Federal Ruhr made one trip to the Great Lakes in December 2017 to Oshawa, Windsor and Hamilton, but sailed in ballast - likely loading grain at a St.Lawrence port.

In 2018 the ship made four trips to the Lakes. On the first it unloaded at Sault Ste.Marine and loaded grain in Thunder Bay. On its way downbound in the Seaway May 15 it struck a Seaway workboat and jetty at the St.Lambert lock, but was not damaged itself. 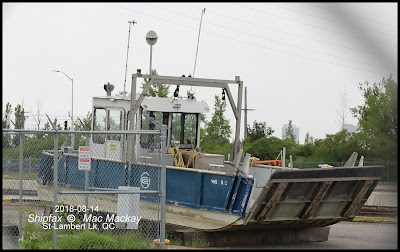 The St.Lawrencxe Seaway snag recovery boat VM/S 002 appeared to be more or less intact when I saw it through the fence at St-Lambert in August.

On its second trip it unloaded at Gary, IN, and loaded at Windsor, ON in June.

On the third trip it unloaded at Cleveland, Detroit and Milwaukee and loaded grain at Thunder Bay, clearing the Seaway October 17.

On its fourth and final trip it had unloaded some cargo at Trois-Rivières, then entered the Seaway December 3, unloaded at Oshawa, Cleveland and Detroit and loaded grain at Thunder Bay December 18 to 22, and was exiting the Seaway on December 26. That leaves several days unaccounted for before its arrival in Halifax, so it may have had a mechanical problem or perhaps topped up its cargo at a St.Lawrence port. Its destination is Trieste, Italy.


This visit to Halifax, of less than eight hours, would likely have been to perform some sort of repair.

I didn't get a decent picture of the Federal Ruhr today, but did catch one of its sister ships this summer. Federal Mosel unloaded at Sorel but did not venture into the Lakes on that trip. 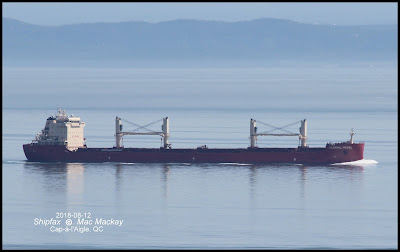 Federal Mosel is a sister ship of Federal Ruhr.

A few other arrivals and departures today were largely invisible. Somewhere out there in the lower photo Atlantic Sail was making its way round George's Island. 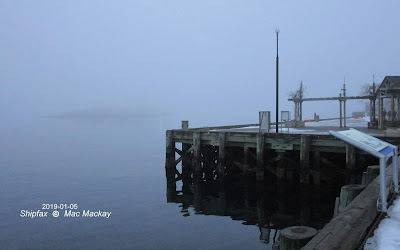 In looking more closely at the photo of the Seaway workboat VM/S-002 I can see some damage to the bulwark on the starboard quarter, which is why it was taken out of service.

The boat was built of aluminum by Eastern Equipment Ltd in Vile LaSalle, QC in 1977. That company built numerous similar  vessels for the Coast Guard and others, but only appears to have been in business for about eight years.
VM/S -002 [the initials stand for Voie Maritime/Seaway] is owned by the St.Lawrence Seaway Development Corp. As mentioned its primary use was as a snag boat, and here is photo of it in operation. Note the forward gantry frame is removable, and is rigged with lifting gear to haul the snags and other debris on board. 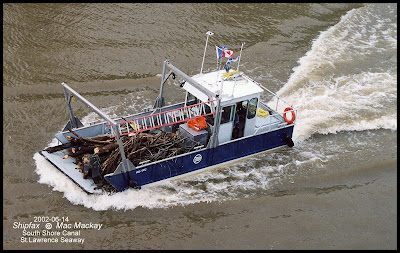