Will we be seeing this sight soon?


There is very little new news about Yantian Express. After fire broke out on deck January 3, the crew exerted their best efforts to fight the blaze, but bad weather and concerns for their safety forced them to abandon the effort. The nearest tug, Smit Nicobar arrived on the scene and eventually evacuated the entire crew.

Yesterday about mid-day the brand new Canadian anchor handling supply tug Maersk Mobiliser reached the ship. This impressive vessel, measuring an astounding 10,181 grt and with a 260 tonne bollard pull delivered by 14,400 kW (20,000 + bhp) main engines, has all the equipment needed to respond to offshore emergencies, including fires. By good luck it had only arrived January 2 in St.John's from the shipbuilders in Norway, and had not yet taken up its charter work.

The Yantian Express is well outside Canadian territorial waters, but since it was headed for Halifax it is logical to assume that the ship will be coming to Halifax  eventually, but many questions remain as to how that will be done safely.

If the fire has not reached the ship's accommodations and engines, and it is extinguished quickly, then it may be safe to have a salvage crew board the ship and perhaps even  make it possible to take back control. However if the fire cannot be put out quickly, and it spreads, it may be a very long time before the ship is in any condition to tow. Some container ship fires have smouldered for weeks, and it was therefore unsafe for firefighters to board and deal with hot spots.

Assuming that the ship does make for Halifax, there is still the question of  where and how to deal with the cargo - both the burned out portions and the rest which may or may not be damaged and may or may not present hazards.

Halifax is lacking in isolated port installations where the cargo can be removed far away from other activity, and without interfering with other port business. Removal of all the cargo without the use of long reach container cranes is almost impossible. Therefore one has to assume that the only place to do the work would be at one of the container piers. I am sure Halterm is not volunteering, and that Cerescorp's Fairview Cove terminal would be the only other possible location. It was the destination of the ship in any event.

Towing a dead ship through the Narrows and taking many weeks to offload at Fairview does pose some problems, since it could tie up the pier's big cranes when they will be needed for other ships.

Certainly an area would need to be cleared and quarantined for storage of the ship's cargo, some at least would be salvageable, and might be forwarded on to consignees by other ships. The large filled area outside the Fairview Cove terminal could be fenced and a temporary road connection could be made to access it if all the containers must be removed form the ship.


I suspect that the law of general average has been  or will be invoked.  A very old principal of maritime law, it means that all cargo owners and the ship owner will share pro rata in the loss of some of the cargo. In this case all the cargo may be written off. However each container would have to be evaluated, so a large inspection area would be needed in order to deal with insurance claims.

Then there is the issue of handling and disposal of  damaged or ruined cargo, some of which will be hazardous. A mitigation and transport loading area would be needed for this work too.

It will be a major headache for Halifax to deal with, if in fact the ship comes here at all. There are other ports along the US eastern seaboard better equipped to handle the problem since they have more space and are away from populated areas. The ship may end up going to one of those ports instead.

Damage to the ship itself is unknown at this time, but it is unlikely that it will be able to continue its voyage. Other arrangements will have to be made for waiting cargo - at this point it will have to be loaded on the next ship in the rotation until a substitute ship can be brought in.

The Port of Yantian
I fear I grossly overstated the Yantian port's container throughput. It appears that the widely published port stats include a far larger area - possibly the entire Pearl River delta area. Shanghai alone accounts for some 40mn TEUs per annum, and is the world's largest port. Yantian seems to handle more like 10mn TEUs p.a., making it the fourth largest in the world.

HAPAG-Lloyd
Shipping Lines certainly have strange names - often abbreviations or their initials. Lines such as MSC= Mediterranean Shipping Company and CMA /CGM = Compagnie Maritime d'Affrètement / Compagnie Générale Maritime have shortened their names for obvious reasons by using the initials. Some, like  COSCO = China Ocean Shipping Company, have found that the initials are pronounceable as a word.

However HAPAG-Lloyd is a a bit different. It is an amalgam of initials and the names of the founding companies, but each is a little different.


HAPAG stands for Hamburg-Amerikanische Paketfahrt-Aktien-Gesellschaft, meaning Hamburg America Steam Packet Joint Stock Company. Founded in 1847 it was commonly known in North America as the Hamburg American Line [HAL] and was once one of Germany's two major transatlantic passenger lines. It was also active in general cargo work

HAPAG's major competitor was NDL = Norddeutscher-Lloyd (North German Lloyd) based in Bremen. Founded in 1857 it borrowed the Lloyd name from Lloyd's of London - the insurance market place of old. At the time the word "Lloyd" was used as a convenient synonym for "shipping company", and several companies, particularly of Germanic origin used.  It was not an indication of any financial connection with Lloyd's of London or Lloyd's Register of Shipping.
[Another company the Dutch Koninklijke Nedlloyd Groep.  (Royal Nedlloyd Group) merged with P+O before A.P. Moller-Maersk bought them out in 1997. PONL containers can still be seen on Maersk ships.]

The two companies, HAL and NDL, merged in 1970, joining forces to finance their investment in container shipping. Despite many changes of ownership and numerous mergers and acquisitions, it has steadfastly held with the HAPAG-Lloyd name ever since.

As for pronunciation I prefer Hay-Pag. Although there are variations such as Heh-Pag or Hah-pag, it is never Hah-Paj as I heard on one media outlet the other day.

Shoebox Oldie
In September 1966 the Wuppertal arrived with fire in the number one hold. The cargo was cotton bales, en route from Corpus Christi, TX to France. The ship's crew, longshoremen and Halifax firefighters removed smouldering bales from the ship and drafted seawater from the harbour to extinguish the fire.
This was before the founding of HAPAG-Lloyd, and the ship was owned by Hamburg-Amerika Linie as it was then called. The acronym HAPAG had not come into use yet.

Here are a few pictures of the operation: 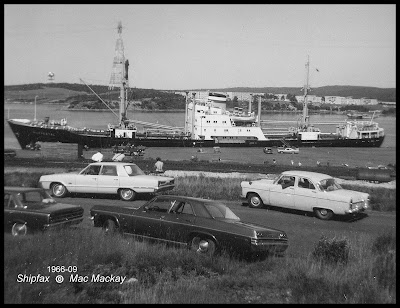 The ship docked at Pier 9C. Aside from the vintage cars in the foreground, note the uninhabited hills of North Dartmouth, with Shannon Park to the right. The Shannon Park pier is visible just above the ship's poop deck.
That is the family Rambler on the left. 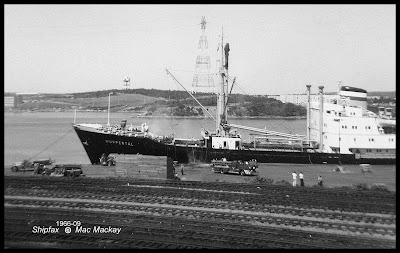 There was still smoke emanating from number one hold.
The A. Murray MacKay bridge was in the planning stages and there was no sign of construction.
BIO appears to the far left.
The four pieces of fire apparatus on scene, include a Bickle-Seagrave, lower left.
Note also the multiple railway sidings. 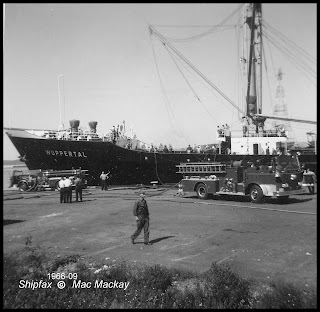 Two open cab Seagrave pumpers, dating from about 1964 were on scene, one drafting water from the Narrows. Curious bystanders wandered through the scene, and took pictures freely in the days before pier security. 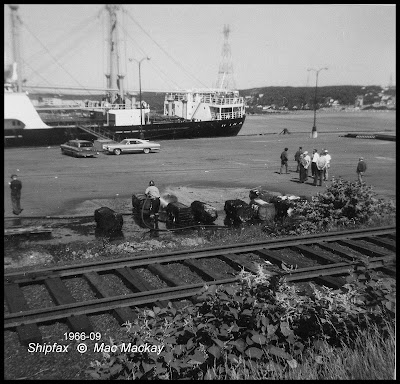 Cotton bales were moved well away from the ship and doused with harbour water.


The Wuppertal was built in 1956 by Lubeker Flender-Werke and was a conventional engines amidship, four hold cargo ship with reefer capacity. Measuring 3280 gt, 5040 dwt, it had accommodation for twelve passengers and handled its cargo with one 60 ton, four 10 ton and eight 5 ton derricks. It lasted through the HAPAG-Lloyd merger, but was sold in 1971 and was renamed Morning Cloud, and in 1973 Siehhui under Somali registry. In 1976 it was purchased by China Ocean Shipping (ancestor of COSCO) and renamed Huang Shan. Its fate after the mid-1980s is unclear and it was finally deleted from listings in 1992.