Another of Mitsui OSK Line's car carriers arrived today. The company has a fleet of 120 of these ships, so it is little wonder that I have not seen this one before. Operating as Auto Carrier Express, MOL  farms some of the ships out to various other lines, and charters some in.  Although managed by MOL, this one is owned by Polar Express SA and registered in the Cayman Islands, suggesting that It is actually owned by someone else. 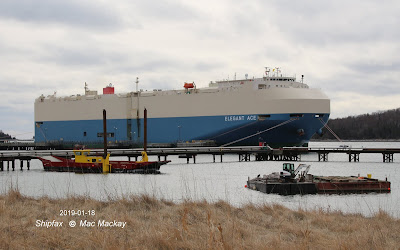 As Elegant Ace tied up in the background at Autoport, work continues on a major upgrade to the adjacent McAsphalt pier. Formerly Dook's dock, the pier is a series of dolphins joined by a catwalk that carries the insulated pipeline. 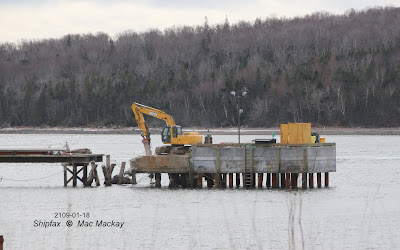 For all the world like Wile E. Coyote, sawing off the tree limb from the wrong side, a concrete breaker demolishes the old dolphin at the end of the McAsphalt jetty.  The new, much more substantial dolphin is on the right in the photo.
It will be interesting to see how the machine is removed when it has finished its work, since the dolphin is connected to land only by a light catwalk.

The work is being carried out by Waterworks Construction, since 2017 a division of the Municipal Group of companies that includes Dexter Construction, a major road builder, and a competitor of McAsphalt in the paving business. 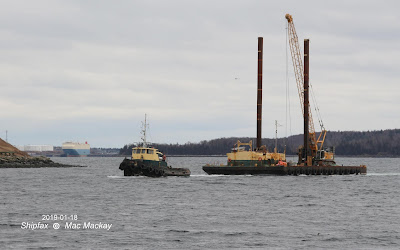 Elegant Ace also appears in the background as Mister Joe tows the dredge Derrick No.3 from Halterm to pier 9. The dredge began work this week and is knocking off for the weekend, and relocating to  Pier 9 due to a forecast of bad weather on Sunday. 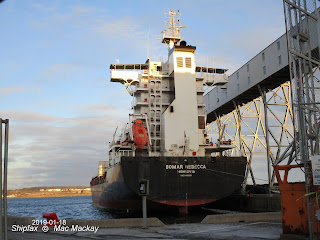 At pier 25 Bomar Rebecca catches the last rays of afternoon sunshine. It works for Tropical Shipping, where the shade canopies over the bridge wings are of some use some of the time, but seem somehow out of place in January in Halifax. In the background the moon rises over the port bridge wing.


The ship is apparently sitting out a couple of trips for Tropical, as it did not sail this week, and its newest fleet made Tropic Hope is due again for next week's trip.