Always a factor at this time of year, weather will have a bearing on shipping activity Sunday January 20, as storm passes up the Bay of Fundy, with snow and or rain and high winds.

One ship will be leaving port because of the storm. Thorco Liva, which has been anchored in a very light condition in Bedford Basin since January 8 will put to sea to ride out the weather. During the last day of high winds, January 9, the ship dragged anchor at least twice and had to take a pilot to re-anchor. The ship will sail at 0700 hrs Sunday morning. 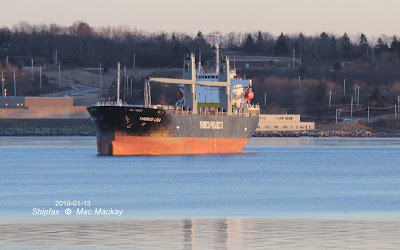 Photo taken one week ago shows very placid conditions - unlike what is expected in the next 24 hours.

The Irving Oil tanker East Coast is scheduled to sail at 1015 hrs Sunday, but that is tentative. It is docked at Imperial Oil, and will have to leave that dock if conditions get rough, and would likely then anchor in the harbour.

Among the arrivals scheduled for Sunday is Salarium at 0500. After discharging a cargo of salt in Saint John during the week it is en route back to the Magdalen Islands. It also anchored in Halifax during the last storm on January 1.

Maersk Penanag arriving from Montreal is due at 1615.

Algoma Integrity is due at 1900. The plan is to anchor until the storm has blown itself out, then take on a load of gypsum.