Break Bulk - and a throw back.

Non-containerized cargo at Port of Halifax facilities has been dropping steadily over the past several years, and is down to about 370,000 tonnes - below 2013 levels. [Cargo handled by National Gypsum, the oil terminals and Autoport are not included in that number.]

Therefore it was most unusual to see four non-container ships working at Port of Halifax piers today.

From  north to south:

CLI Pride was tucked in at Fairview Cove, and must have discharged its project cargo quickly. The 7138gt, 7821 dwt ship dates from 2011 when it was built by Dongfang Shipbuilding Group in Yueqing, China as Brielle. It became BBC Luanda in 2014 and took its present name in August last.
The ship arrived off Halifax Sunday from Rotterdam, and is returning to the same port. I am not envious of the return trip across the Atlantic in ballast in a relatively small ship.
The ship was in  Montreal as recently as the end of October. It was also on the Great Lakes in July under its previous name.

Crew members check the lashings on a pleasure craft stowed in its cradle on deck.

It took an extra wide angle lens to squeeze Danzigergracht into one photo at Pier 9 c. As with many Spliethoff ships it has several pleasure craft on deck as part of their regular yacht delivery service from Europe to the Caribbean. However that was not the reason for the ship's call here. To the bottom right of the photo are the tips of three wind turbine blades that the ship offloaded this morning.
They would have been carried below deck and are as long as the space between the middle crane and the ship's bridge.
Built in 2009 by Jinling Shipyard in Nanjing, China, the 13,558 gt, 18,143 dwt ship has three 120 tonne capacity cranes and is specialized for heavy lift and project cargoes, but can also carry sensitive cargoes such as paper products.

Although not carrying cargo, work continues in the holds of Thorco Liva. If its past visits to Halifax in 2016 -2017 are any indication, it is related to carrying fibreoptic cable. It is also multi-purpose ship, capable of heavy lifting. It was built in 2012 by Honda Heavy Industries in Saiki, Japan, rated at 13,110 gt, 16,901 dwt and fitted with a pair of 50 tonne cranes.
And at pier 27 there is another ship of the same type. Regrettably no photos are possible, but Onego Rio  is a 7576 grt, 10,300 dwt ship built in 2003 by Damen Okean in Mykolayiv, Ukraine. It carries a pair of 80 tonne capacity cranes, which it is using to discharge a cargo of rails for CN.

Throwback
The recent news about the Yantian Express* fire noted that the ship Happy Ranger was standing by the to assist if needed. When the tug Smit Nicobar arrived,  Happy Ranger was relieved, and continued its journey from Abidjan, Ivory Coast to Trois-Rivières, QC.

The ship visited Halifax only twice as far as I can recall, and on its first visit it loaded a very unusual cargo. 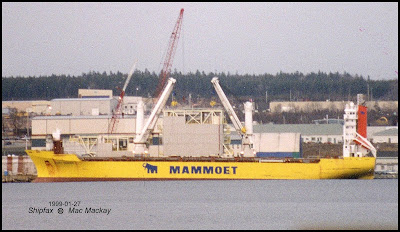 As part of the development of the Sable Offshore Energy Project (SOEP), the accommodation structures for the Thebaud field were fabricated in Dartmouth and Halifax. The ship used its 400 tonne cranes to load the blocks. They were then taken to Teeside, UK where they were mounted on the bases, then transported back to the Thebaud field for installation. 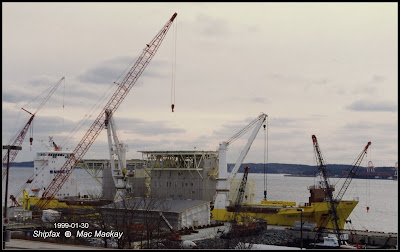 Now twenty years after the first gas flowed, the project is being decommissioned, the structures will be removed and taken to Europe to be scrapped.


* Footnote
I am irritated by "the media's" continual mis-pronunciation of the name Yantian Express. Named for a city in China, the spelling should accurately indicate how it is to be pronounced. It is not "yan-TAIN" please!

Just to give a sense of why HAPAG-Lloyd named a ship after Yantian - the Yantian International Container Terminals has an 8km long waterfront, equipped with 70 container cranes and had a throughput of 78.3mn TEU in 2013. (Halifax will likely squeak past 500,000 TEU again for 2018).