Reports indicate that the Maersk Mobiliser has the Yantian Express in tow. Although not stated, this implies that there is crew aboard the ship, whether ship's original crew or salvors, someone had to be aboard to rig the towline. They may have since left the vessel again once the line was secure. Making a tow up either by the bow, or by the stern, can be a very labour intensive job if the ship has no power for winches.

There is also an initial damage assessment of effected containers. This could have been done from reports by the evacuated crew, however there is one statement that says "all reefers in Bay 1 to 24 are without power and switched off. All other Bays with Reefers are continuously supplied with power and in operation." This would also indicate to me that there is someone aboard the ship tending to the power plant. However the ship is not using its main engine, so does not have a full operating and navigating crew on board.

The ship's cargo hold is allocated bay numbers - odd numbers for 20 foot containers and even numbers for 40 foot. Bay 1 is the farthest forward.

Looking at some photos of  Yantian Express's sister ship Ningbo Express, I can see the actual bay numbers marked on the hatch coamings, for twenty foot containers. 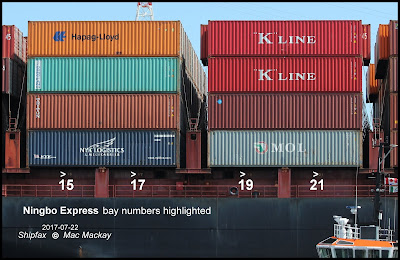 Odd numbers represent 20 foot bays Even number are not shown, but bay 16 is a forty foot bay consisting of bays 15 and 17. 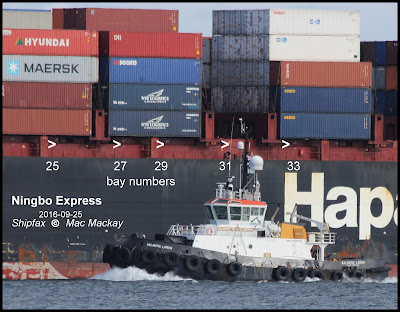 Bay numbers in white added by photo editing
Bay 31 is set up for 20 foot containers only.

Extent of damage from the press release is said to be Bay 12 on deck forward, and below deck  Bay 1 to 9. Cargo below deck in Bays 11 to 17 may be effected, and as per the above, reefers from Bay 24 forward are without power.

Towing an unpowered ship is a slow process, and at last report they were barely making headway. ETA for Halifax is now January 20, but that depends on a number of factors.