Short days are still with us, and it will be several weeks before they are long enough to catch most arrivals and departures.  There were two arrivals after dark today and there will be one before sunrise tomorrow - all first time callers.

There was just enough light to catch Spliethoff's Danzigergracht as it made it way in this afternoon to Pier 9c. Due to come in from anchorage tomorrow morning CLI Pride will be going to Fairview Cove. Both ships will only be in port for a short time, so there may be a chance of photos in daylight when they sail. 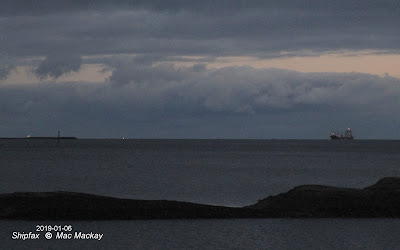 Danzigergracht is coming up on the  Maugher's Beach reporting point, while CLI Hope' Pride's lights show over the breakwater from its anchorage position. (1700 hrs AST)

Also arriving late this afternoon, the cargo ship Onego Rio tied up at Pier 27 to off load rails for CN. No chance of a photo there - perhaps when it sails later in the week.