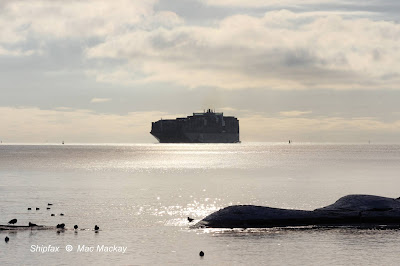 The Port of Halifax has issued its container statistics for 2018 with little fanfare. I guess that would be expected from one of the few ports to show a decline in container trade over 2017. Citing the results as "consistent with 2017" which was a record year, was about the best face they could put on it.

It is always amusing to put the port of Halifax in perspective with some other ports of the world.
Here are a few examples:

It is still to early for the world's major ports to assemble their stats, but here are a few interesting numbers:

Singapore does about 3 mn TEUs per month!

Halifax is rather small potatoes by comparison to any other known container port, and the loss of even one line or the rationalization of others (all of which happened in the last quarter) can make a significant shift in numbers.

Being able to accommodate larger ships would have made no difference to the results for 2018, but that may not be true in the years to come as larger and larger ships come on line.

The Port also unveiled its master plan last week, and to no one's surprise it featured an expansion of the southend terminal at the expense of the deepwater finger piers. The plan seems to be putting a great many eggs in one basket and leaves many questions unanswered.

While the debate goes on, I will have more to say on the master plan in future blogs.


Things were a little bit cheerier in the non-container activity in the port.

1. The unlabeled photo at the head of this post shows APL Columbus when it called here December 12, 2018. The CMA CGM ship scheduled to call here January 21, APL Detroit, did not show up. It bypassed Halifax completely and continued to ports on the US east coast.

2. The unlabeled photo at the tail of this piece is a container (slightly abused) that is used to welcome cruise ship passengers to Halifax.  It is part of a gangway system that protects them from the weather - I guess it also prepares them for the sensory deprivation they are likely to experience in Halifax on a rainy foggy day.