Algoma Central Corporation is on the move again with more acquisitions. 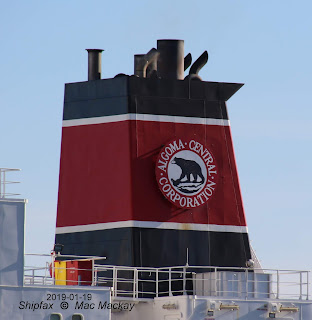 The Algoma Tankers division's Algonorth arrived again today on its shuttle run from the Valero refinery in Lévis, Quebec for Imperial Oil. In view of impending bad weather - including high winds tomorrow - the ship tied up at Pier 9C to wait it out. Since the ship arrived from Sweden at the end of November it has been dedicated to the Halifax run.

Algoma got into the tanker business when it acquired the remnants of the Imperial Oil fleet in 1998. When Imperial closed its Dartmouth refinery, Algoma tankers became rare sights in Halifax. Imperial began to source it refined products in the US or Europe, but has now apparently done a deal with Valero. Most of what Valero refines is now sourced from western Canada, via pipeline to Montreal. Shuttle tankers transfer the crude to Lévis where it is refined. At one time the product was sold under the Ultramar label, but labels don't mean much anymore as far as origin is concerned. (For example, under cover of darkness tonight, Irving's East Coast will shift from the Irving Oil dock to Imperial dock 4 to discharge some cargo.) 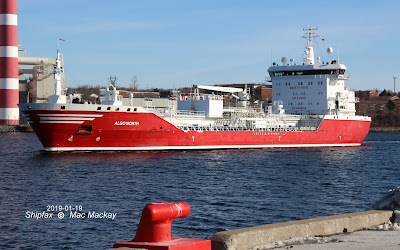 Inbound in the Narrows, the ship's colour scheme fits well with the surroundings. I will be sorry to see it repainted in Algoma's deep blue. I will also miss the distinctive white stripe.. 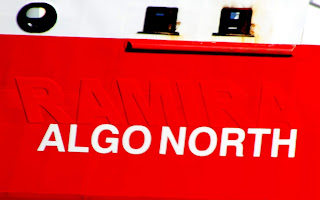 The ship's last name, Ramira is still visible above the new name. Due to the stenciler's spacing it looks like two words, but is one. 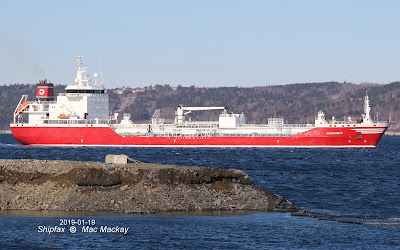 The ship went into Bedford Basin far enough to turn around.  Although accompanied by the tug Atlantic Fir from the lower harbour it was not until the ship had turned that the tug came along side and made fast. 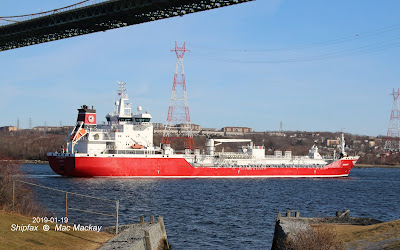 Back under the A.Murray MacKay bridge again it headed for Pier 9C.

Built in 2008 by Tuzla Gemi Endustrisi in Turkey, he 12,164 grt, 16,8979 dwt tanker was named Gan-Gesture until 2009 when it was acquired by Alvtank Rederi AB and renamed Ramira under the Swedish flag. A DNV Ice class 1A vessel it is well suited to a winter shuttle service between Lévis and Halifax. The ship was registered in Halifax November 9, 2018, but did not arrive in Canada until November 30. Its first arrival in Halifax was December 11, 2018.

Algoma's deep sea fleet will also be growing as they announced Friday that they had made an offer to acquire the Oldendorff Carriers GmbH + Co interest in the CSL International self-unloader pool. In 2016 CSL and Algoma divided up the Klaveness ships in the pool which will now have only CSL and Algoma ships. In this transaction they will acquire three Oldendorff ships.

The three ships in alphabetical order are:

Alice Oldendorff, built in 2000 by Shanghai Shipyard, measuring 27,825 grt, 48,000 dwt. It is called a hybrid self-unloader. A conventional bulk carrier with four cranes and clamshells it was then fitted with a complex hopper, conveyor and swing boom arrangement. All the gear is above deck, which allows for greater hold capacity, and could be retrofitted with minimal modifications to the ship. Unloading rates are dramatically slower than the "built in" systems. Alice Oldendorff unloads at 750 tonnes per hour versus 5,000 tph or more for the other ships. 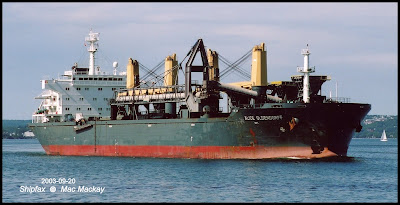 Alice Oldendorff  in Bedford Basin with a less than full cargo of gypsum.

An (old) Panamax size ship, the self-unloading gear is mounted forward, where it takes up less cargo space in the hold. 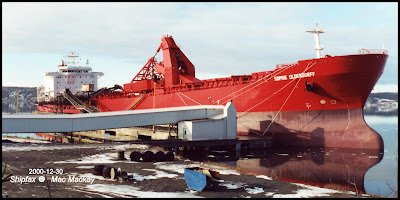 Seen here at National Gypsum in Dartmouth on its first call, the ship has a midships mounted self-unloading system, with an articulated boom.

Algomna will thus have a 40% interest in the CSLI pool, which numbers 18 self-unloaders. When the transaction is finalized in 2Q 2019 Algoma will have eight of them. One, Algoma Integrity, is due in Halifax tomorrow (weather permitting) for another load of gypsum.

Purchase of these ships for a reported $100mn was made possible by the refund of deposits on four ships that were to be built by Uljanik's 3 Maj shipyard in Croatia. The yard has been closed due to financial issues, and could only deliver one of five planned ships. The refund amounts to $115mn.
Algoma has also extended options for three ships with the Yangzijiang shipyard in China. These ships may join the domestic or ocean fleets.

On the domestic front Algoma's Great Lakes fleet is shrinking (temporarily at least) as two veteran lakers have been laid up ready to go for scrap next year. However with one new delivery last year and another in February the number of ships will remain the same year over year.

The ships that have been retired are: 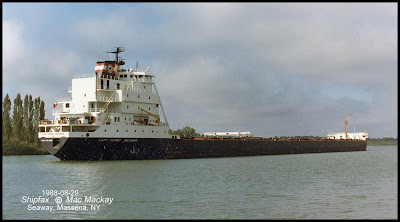 Capt. Henry Jackman, before conversion to a self-unloader, in the US Seaway between the Eisenhower and Snell locks.

Algowood, also built in 1981 was a self-unloader from the beginning. 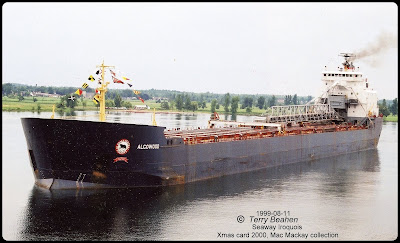 Algowood approaching the Iroquois lock dressed all over to celebrate the 100th anniversary of the founding of Algoma Central.

Both ships were confined in their travels to the Great Lakes / St.Lawrence system and did not venture into the ocean.

Algoma also has interests in cement carriers and smaller ships through other allliances.