Halterm was running efficiently this morning with one ship leaving and another arriving right on its tail. The Icelandic Steamship Co (Eimskip) had their regular caller Skogafoss in this morning for a short stay on its westbound trip. It sailed at 1130 hrs. 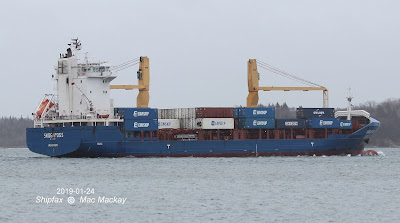 On sailing Skogafoss has some CMA CGM boxes on deck on for its New England feeder service.

The inbound Jennifer Schepers timed its arrival to take the berth just vacated by Skogafoss. 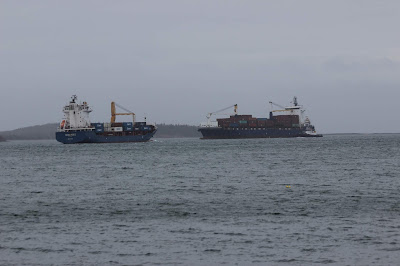 Skogafoss and EF Ava are the two ships servicing Eimskip at the moment. However a third ship, Lomur is to join the rotation in February. Last year the line increased it to three ships to provide a weekly service to and from Iceland  and a New England feeder from Halifax for CMA CGM.

Skogafoss is a chartered vessel and has been calling here since 2011. Last March 9 its charter was extended for a year, but there has been no word yet on another extension. Built in 2007 by Sainty Shipbuilding in Yangzhou, the 7545 gt, 8210 dwt ship sailed as Ice Bird until 2011 when it took up the Eimskip charter, (Briese Schiffahrts are managers.) Fitted with a pair of 60 tonne cranes, the ship has a capacity of 698 TEU, however that goes down to 425 if they are all loaded to 14 tonnes. 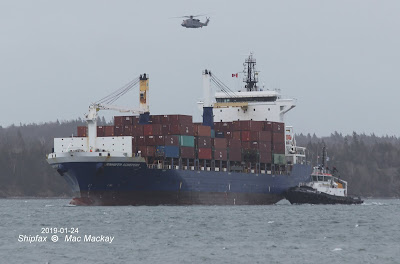 As soon as Skogafoss had passed Jennifer Schepers turned for Halterm. The RCN kindly provided an escort.

At the other end of the harbour things were more quiet. There were no ships at Fairview Cove, and in Bedford Basin two ships sat at anchor. Onego Rio has been there since January 14 after unloading rails at pier 27. Tomorrow it is due to move to pier 28 - reason not yet known - it is not scheduled to load or unload.

The other Basin resident is the impressive Super Ice tanker Gotland Carolina I am always impressed by these ships. Even though they are the same size (29,283 gt, 53,160 dwt) as most product tankers, they look bigger. Perhaps it is the large superstructure and full width bridge. 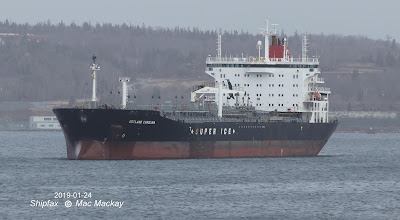 The ship was built by Guangzhou International in 2006 and is one of several ships of its class managed by Hafnia of Denmark. A company founded in 2010 by former Torm executives, on January 10, its shareholders agreed to merge with BW Tankers. Hafnia's 37 tankers added to BW's 50 plus will give a sizeable fleet. [ Look back to December 27 for more on BW Tankers.]

Gotland Carolina has also just taken up a new two year charter with Clearlake (the world's largest tanker charterers)  at a rate of $US 12,200 per day. For that kind of money I wouldn't expect the ship to be sitting too long before its next asssignment. Its last port was Paulsboro, NJ, in the Philadelphia chemical region, and it has been in Halifax three or four times in recent years, and is well known on the St.Lawrence River in winter.