As predicted Sunday's storm resulted in the suspension of pilotage operations in Halifax from Sunday pm until 1500 Monday.

Some ships managed to squeeze in and out of port before conditions worsened. The container ship Paxi sailed and the bulker Salarium arrived. Thorco Liva also sailed, but continued on to Portsmouth, NH where it will eventually load cable at Newington. East Coast also sailed, and headed for Portland, ME. It must not have unloaded all its cargo here at Irving Oil and Imperial.

Scheduled arrivals put back out to sea. Maersk Penang and Algoma Integrity stood well offshore and although pilotage operations resumed at 1500 hrs today, it took the ships until 1630 and 18630 respectively to reach the pilot station. Although not listed on yesterday's arrivals, APL Detroit would normally have arrived Saturday or Sunday. It arrived at the pilot station at 1700 today.

Tropic Hope went to anchor well into St.Margaet's Bay and put off arrival until tomorrow. Since the preferred berths at Halterm are now occupied there was no point in coming in tonight and having to shift berths again tomorrow. The autocarrier Delhi Highway has also put off coming in until tomorrow.

Salarium is listed to depart tomorrow also. Since the storm moved off in a northeasterly direction, it ran the risk of catching up with it before reaching Cabot Strait. Also Algonorth will move from its standby berth at Pier 9C to Imperial Oil.

It seems that there have been many more suspensions of pilotage operations in the last six months than anyone can recall. Scientists have observed that weather is becoming more severe, and that storm events in particular are more intense. Therefore the risks to vessels and to pilots are increasing, and it is with safety in mind that these suspensions are becoming more common.

The Atlantic Pilotage Authority is also at something of a disadvantage at the moment with both its regular Halifax pilot boats out of service.

The Nova Pilot and Scotia Pilot were only acquired in the summer of 2017 and have been less than reliable. In part this is due to their water jet propulsion system, which is apparently somewhat fragile and prone to leaking. Both boats were built as pilot transfer and crew boats for use in protected waters, and may not be durable enough for the rigours of offshore pilotage.

Nova Pilot was sent to Meteghan for repairs late last year and has not yet returned. Scotia Pilot was removed from service last week and is tied up at Dominion Diving in Dartmouth. Filling in are the veterans A.P.A. No.18 (built in 1974) and Fundy Pilot (built 1983). Both were serving as backup boats elsewhere, but are now in daily service here. 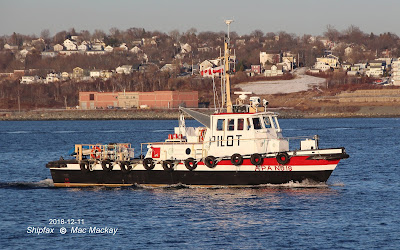 The veteran APA No.18 is one of three similar boats built in the 1970s and still answering the call. 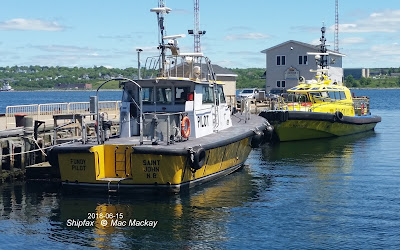 Fundy Pilot has been here since June, orginally to fill in for the Scotia Pilot. It is now in regular use  as both Nova Pilot (shown here) and Scotia Pilot are out of service.

Certainly conditions have been extreme lately, and it is unlikely that any pilot boat could have stood up to some of the recent weather. However that may be the new normal, and if so durable pilot boats will be essential to the smooth running of the port.