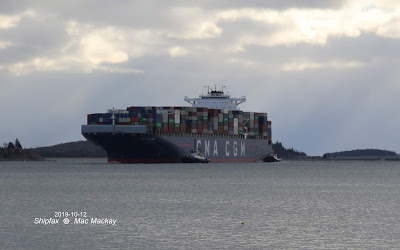 The size of container ships calling in Halifax is creeping upward. Having passed the 10,000 TEU threshold last year, the new benchmark has been set by today's arrival, CMA CGM Libra.
Listed at 131,332 gt, and 131,292 dwt [CCS] the ship is a hefty 363.61m overall length x 45.6m width and draft 13m. Container capacity, depending on the source, is in the 11,200 to 11,388 TEU range, including 800 reefers.
Hyundai Heavy Industries in Ulsan built the ship in 2009. They also built its main engine under license from MAN B+W. It can propel the ship at 25 knots. CMA CGM has 13 sister ships in its fleet, so we might expect to see more of this size, although none are currently scheduled.

Atlantic Oak squares up to push on the ship's bow to make its turn. The tethered escort tug Spitfire III is out of view off the stern.

It is rare to find details about a ship's cost and value, however CMA CGM Libra was aground off Xiamen, China for eight days in May 2011, and an adjustor's report revealed an assessed value of US $120 mn for the ship. At the time is was only partially loaded, with 5,983 containers, but the cargo they contained was valued at $367mn and the containers themselves at $14mn. There was also in excess of $1.5mn in bunker fuel aboard. Even though there was minimal damage to the ship, some containers and some fuel had to be lightered off, and it took nine tugs to refloat. The salvage award was $9.5mn under a Lloyd' Open Form (No Cure No Pay) + SCOPIC. The owners declared general average and there was an 8% charge on contributing value for the cargo carried.

The days of larger ships are upon us, as CMA CGM Thalassa is due on February 2, and it is rated at 10,980 TEU.