ZIM Vancouver arrived this morning signalling another step in ZIM's many service and route changes. 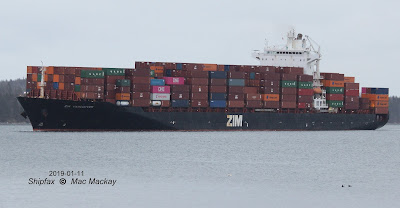 Zim Vancouver comes up on the turning point to back into pier 42 Halterm, in a light snow flurry.


It is a 4250 TEU vessel with gross tonnage variously reported as 39,906 or 41,482 (such a discrepancy is hard to account for). Deadweight tonnage is generally agreed to be 52,232. The ship was one of a large series built by Dalian Shipbuilding Industry. Launched in 2007 as ZIM Vancouver it was soon renamed Pearl River I and reverted to ZIM Vancouver in 2012.

ZIM's ZCA service calls in Halifax on Fridays, and ZIM Vancouver has been added as the eighth ship on its 13 port rotation from the Mediterranean to the east coast of North America. ZIM's remaining Halifax service, a weekly feeder links with their Kingston Jamaica hub.

The ZCA service is run in association with THE Alliance as their AL7 service, as is evident from the number of HAPAG-Lloyd/USAC, ONE and Yang Ming boxes on the well-loaded ship.

Competing shipping lines have often joined forces to maximize efficiency of their ships. In fact they formed shipping conferences and other forms of joint ventures that controlled rates. These were eventually declared monopolistic and banned  by the EU ten years ago. However the lines have continued to find other ways of working together.
These have included alliances of various sorts and even lead to the consolidation of the three major Japanese container lines under one common ownership.

Another aspect to all this is fuel costs. Surcharges to cover price increases and slow steaming by ships to save money have become a fact of life. By consolidating competing line services, adding more ports to a line, by reducing speed, and by sharing ships, and thus reducing the total number of ships required, the lines can increase profits.

ZIM was one of the last independent hold outs as the giants Maersk, MSC and CMA/CGM found work arounds by basically renting space on their ships to other lines.  The lines would still compete on rates and other charges, but would find it easier to fill their ships for each trip. By making better use of ships, the total number of ships required can be reduced and each ship would carry more cargo on each trip.

Faced with mounting losses ZIM has now done deals with the major world players to share routes and "swap" cargo space (slots) on the ships. This is not a bad thing - either for ZIM, the other lines and presumably for their customers. For now at least it assures that there will continue to be rate competition, and that efficient routes will be established. As long as ship supply exceeds demand, this situation will persist. The various deals allow ZIM to shed a number of chartered ships. It had the highest proportion of charters among major lines, and stands to save a great deal of money as a result.


The traditional ZIM service ZCS that began calling in Halifax in 1972 has been merged into the 2M alliance of  Maersk and MSC, and no longer calls in Halifax. Halifax has also been dropped as a port on ZIM's ZCI service. Instead there is the weekly feeder service to the Kingston, Jamaica hub. The ZCI service is now run in association with THE Alliance (HAPAG-Lloyd,  ONE and Yang Ming). ZIM also has arranged for space on the Columbus loop service operated by CMA/CGM, COSCO and Evergreen that does call in Halifax.