At approximately 0215 hrs this morning the workboat Captain Jim lost power and began to take on water off Devils's Island, just outside the harbour. Of the three persons aboard two managed to escape and were recovered by the pilot boat Captain E.T. Rogers. The third person, an employee of the owners RMI Marine, could not be found and an extensive search was undertaken.
Regrettably he was trapped in the boat when it went down and did not survive.
The two survivors were wearing PFDs and required no medical treatment. 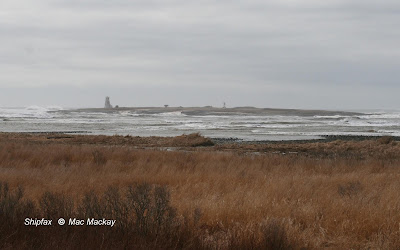 Devil's Island is a windswept dot of 12 hectares off Eastern Passage, the narrow inlet to Halifax Harbour to the east of the main channel. Its name is thought to be a corruption of Deval, Devol or Deville's Island. It is the site of an automated light house.

With water temperature at +1C and air temperature at -11C there was little hope that anyone could survive in the water for very long. The exact location of the sunken boat in approximately 12m of water took some time to be pin point. Coast Guard, Navy and civilians participated in the search operation. 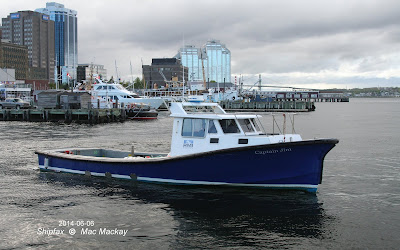 Captain Jim has been in a fixture in Halifax Harbour for many years carrying out launch duties such as small craft towing, personnel transfer and construction support. The boat was built in 1989 by Guimond Boats Ltd, Baie Ste-Anne, NB along the lines of a Northumberland Strait fishing vessel.
Originally operated as Atlantic Walnut for Atlantic Towing Ltd it worked in Saint John, NB before coming to Halifax. It was re-named for Jim Ritcy, the legendary founder of Dominion Diving Ltd, and mentor to many divers. RMI Marine is an independent company, not associated with Dominion Diving.

At the time of the incident the boat was transferring a person to or from a ship anchored off Halifax. Two ships, Star I a tanker bound for Imperial Oil and Elka Hercules bound for Irving Oil in the anchorages awaiting berthing.