In my last post I mentioned that the regular pilots are out of service and back up boats have been brought in. It now transpires that on January 16 while Scotia Pilot was approaching to board the pilot on the container ship YM Enlightenment, the boat lost power and collided with the ship. There was damage to the boat but it was able to regain power and return to base. There were no injuries to the three persons aboard the boat.

Later in the day it moved to Dominion Diving's dock in Dartmouth Cove and Fundy Pilot, which had been tied up there, was brought into service.

This morning Scotia Pilot was still at Dominion Diving, but had its engines running. Due to the extreme cold  (-10C) I could not tell if this was exhaust smoke or vapour from cooling water. 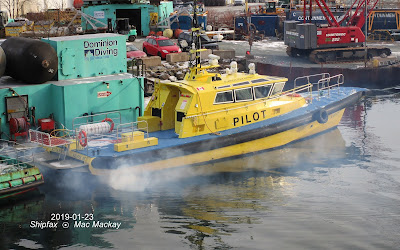 Whatever damage there might have been to the boat it must be on the port side (against the dock) and was not visible from my vantage point. 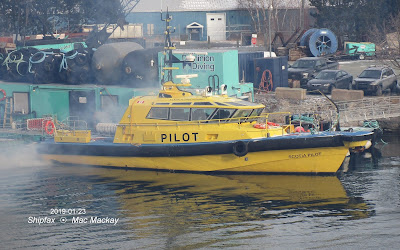 Engine reliability is critical to safe pilot operations, so until the boat is operating reliably, it is not likely to return to service.