After a wild night off Halifax with wind gusts approaching hurricane strength, it is no surprise that pilotage operations were suspended until this morning.  When they did resume its was Captain E.T. Rogers doing the duties as pilot boat. 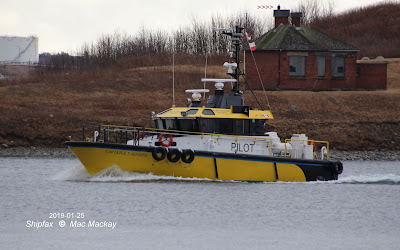 Under the watchful eye of an eagle, perched on the chimney top of the George's Island building in the background, Captain E.T. Rogers returns from a pilotage assignment.


Captain E.T. Rogers has been brought in from Saint John, NB to help out in Halifax while the regular pilot boats are out of service. It is no stranger to Halifax however, as it was built for service here in 2012 and named Chebucto Pilot. In 2017 it was transferred to Saint John to join a sister boat Captain A.G. Soppitt Both boats were built by ABCO Industries in Lunenburg to the same design, and the transfer was intended to rationalize maintenance and operations by having two identical boats.

Also returning to port this morning as soon as pilotage services resumed was the big OSV (Offshore Service Vessel) Horizon Star. It sailed from Halifax January 15 for the burning Yantian Express carrying salvage equipment and possibly personnel.  That ship is slowly heading for Freeport, Bahamas, in tow and with its chore accomplished Horizon Star has returned to port.