I may have incorrectly left the impression that B.C.Packers' first appearance in Atlantic Canada was in 1962. That was not the case. In 1951 B.C.Packers purchased the fish plant and freezer operations of Roy Jamieson in Canso, NS. BCP seem to have found a variety of boats from different places to fish from the plant until 1962 when they departed Canso for Newfoundland.

There did not seem to be a naming scheme for company owned boats at the time, and so I do not have a complete fleet list for the Canso plant. One I do know of was called Neptune. It was built in Quincy, MA in 1936 and was fishing from Canso until the late 1950s when it was sold to Burgeo Fish Industries Ltd and renamed Neptune VI.

When B.C.Packers began to name/number their boats, they became much easier to track. So here is the fleet as I have pieced it together. There is still a lot of info missing – so any amendments are welcome.

Rupert Brand The first trawler to bear this name, was built as Boston Swallow for Boston Deep Sea Fishing + Ice Co of the UK, by Richards, Lowestoft in 1949. It arrived in Canso February 3, 1952. On June 28,1955 it collided with the Norwegian Avenir 100 mi north of Corner Brook, NL with 180,000 lbs of fish on board. All 13 crew were saved, some taken off by Avenir and the rest by the tug Louise Simard, which took the trawler in tow. However it sank soon after.
.

Rupert Brand II was built by Goole Shipbuilding in the UK in 1953 as Nordepic for North Eastern Fish Industries Ltd of St.John's, NL, (owned by the Moores family), which had a frozen fish plant in Harbour Grace, NL. BCP acquired the boat in 1955 to replace the first Rupert Brand. It fished from Canso at first and was one of the boats transferred to Newfoundland in 1962.
On March 26, 1966 it went aground at Anse au Loup, NL but was freed by Foundation Vigilant and towed to Grand Bank. Whether it was repaired or not I do not know.
Its rusted out emains still exist in Jersey Harbour, across from Harbour Breton, where it was beached and abandoned.
.


Rupert Brand IV came from T. Mitchsion Ltd of Gateshead, UK in 1957 as Boston Comet for Boston Deep Sea Fishing+Ice Co. BCP acquired the boat in 1959. I saw it laid up in Lunenburg in 1975. It was then in poor condition, but I do not know what became of it after that. Transport Canada kept is registry open until March 10, 2008 when it was suspended.
.


Rupert Brand V was built as Bergemeester Huesden in 1955 by Werk I.S. Figee NV of Vlaardingen, Netherlands. In 1958 it became Golfstoom. I assume it was acquired by BCP about 1963. In 1972 it was sold to Capt. Hanford A.McBride, of White Rock, BC, and he sailed it to the west coast. 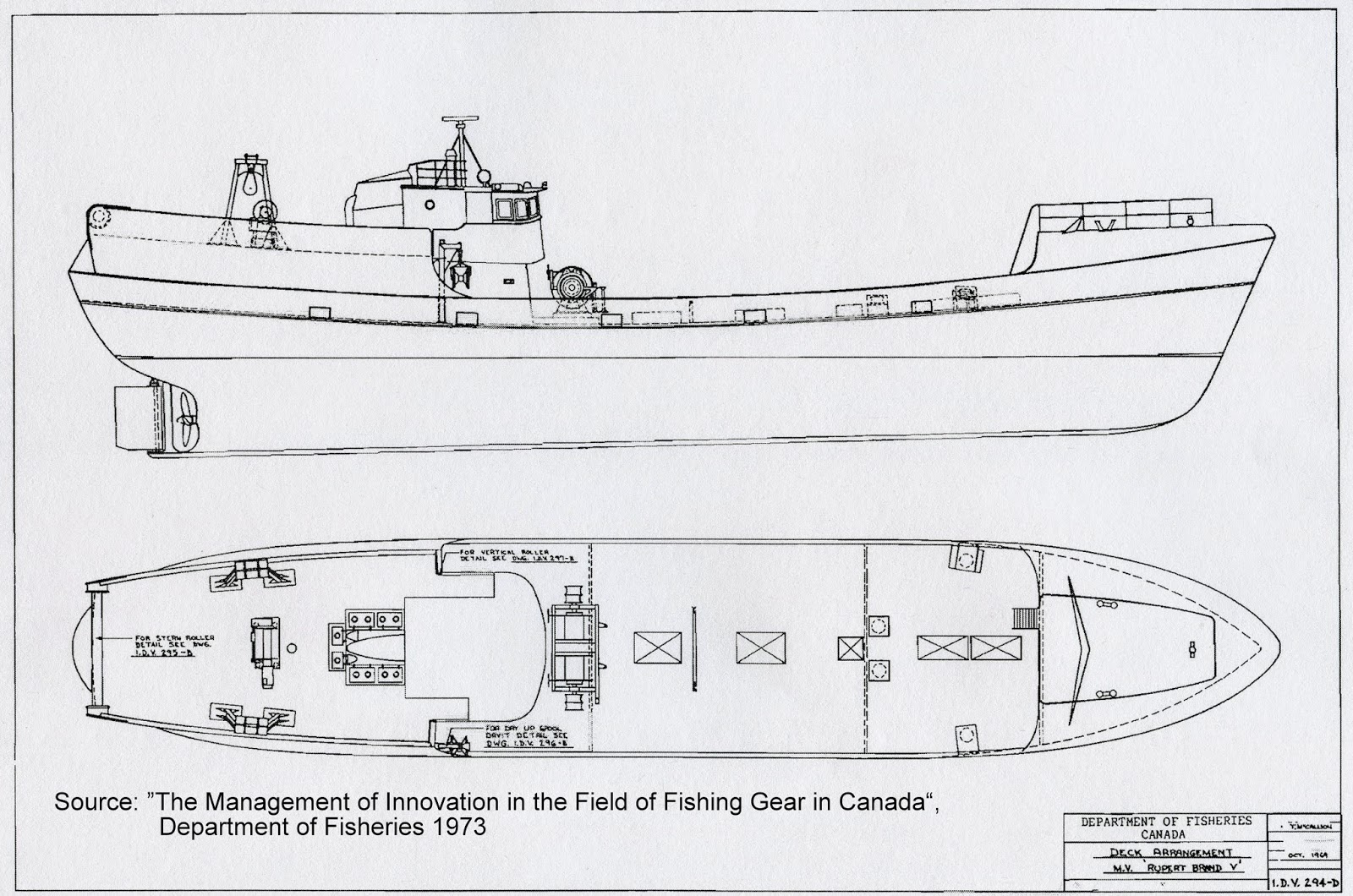 On the west coast Rupert Brand V was modified to fish over the stern. The gallows were moved aft, and a stern roller installed. The drawing also shows the mast removed too, but there must have been a mast somewhere for nav lights!

It participated in numerous experimental and research trips for ground fish off the Queen Charlotte Is, and elsewhere.At the end of 1972 he renamed the vessel Gail Bernice. In about 1983 it was sold to an owner in Gibsons, BC, who later renamed it Nor Wes Gale. It became a floating restaurant/hotel/accommodation vessel, and its current ownership is listed as Transwest Financial Services Corp of Edmonton, AB.

As mentioned in the earlier post, when Weston's took over BCP they went on a building spree with government subsides. At the same time they decamped to Newfoundland, and in due course the three new trawlers arrived from George T. Davie Ltd in Lauzon.

Zebroid , as converted to a scallop dragger, stuck in the cradle at Dartmouth Marine Slip, June 21, 1990. It was freed by the tug Point Halifax assisted by Roseway.

Rupert Brand VII, also from 1963, followed a similar path going to FPL in 1977 and renamed Zebroid. However it was transferred to Riverport, NS and converted to a scallop dragger after FPL was re-organized into Fisheries Products International Ltd and acquired Riverport Fisheries from the Nickerson/Ritcey group.

Ocean Choice International acquired the Riverport operation and in 2005 sold Zebroid, and fleet mate Primo to Dawson Moreland +Assoc (owners of the Picton Castle) for conversion to auxiliary sailing/cargo vessel. Delays of various sorts resulted in a 5 year layup. In 2010 Pacific Schooners Ltd of  the Cook Islands, bought Zebroid and renamed it Tiare Taporo. However it was not until early 2014 that conversion to a passenger freighter (30 passengers/300 tons cargo) was completed. The ship is fitted with a full suite of auxiliary sails in a substantial ketch rig.
A legal dispute has delayed departure. The ship is to trade between Cook Islands, remote tourist and offshore dive sites and Hawaii.
.

Zerda at Pictou converting to a scallop dragger. Work involved enclosing the side alleys and winch, rigging double booms  and placing the gallows forward on both sides.

Rupert Brand VIII came out in 1964 and became FPL's Zerda in 1977. Laurence Sweeney Fisheries Ltd of Yarmouth bought the boat in 1988, renamed it Paraclete and Pictou Industrtes Ltd converted it to a scallop dragger in 1989. It fished on George's Bank and landed its catch in Lunenburg. 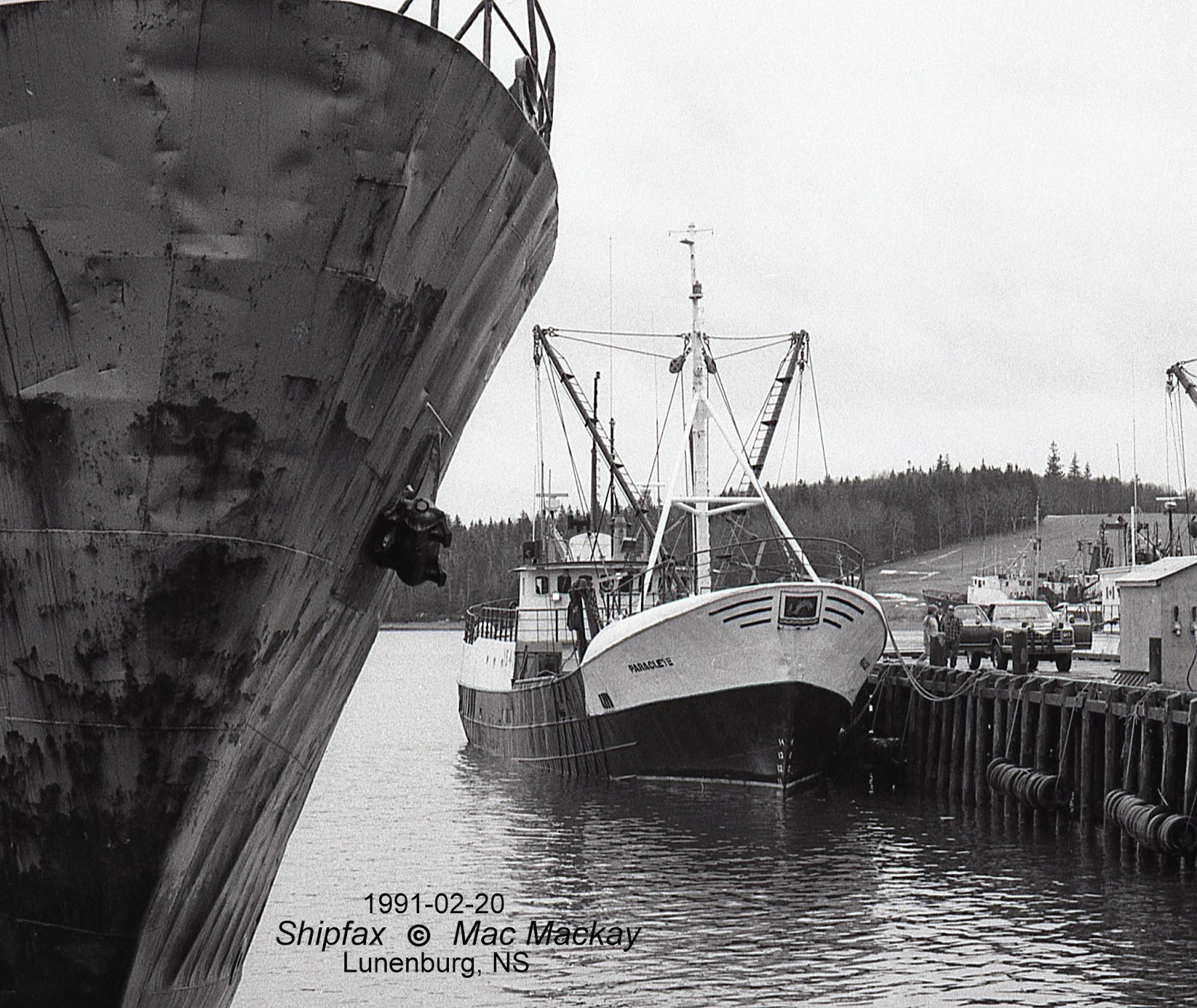 Paraclete tied up in Lunenburg in 1991.
In 1996 Paraclete was sold to US interests for delivery to the Mediterranean. Its Canadian registry was closed in 1997 and it made its way to Portland. ME where it was drydocked to repair shell plating deficiencies (which had caused the boat to be condemned by Canadian inspection authorities). Since then it has been reported under Spanish flag in 1999 as Cabo Tinoso Dos. Initially involved in Mediterranean tuna fishing, by 2011 it seemed to have found work related to fish farming, based in Cartagena.

Aside from one wreck in Jersey Cove, little remains of the B.C.Packers eastern Canada fleet.

I have not dwelt on B.C.Packers herring fishing activities in eastern Canada, but that is another story.