Pacific Ocean - not so peaceful and other activities [pictures added]

The world "pacific" meaning peaceful does not apply to the bulk carrier Pacific Ocean which arrived this morning for mandatory Asian Gyspy Moth inspection and for bunkers.
Freezing rain, ice pellets them snow, driven by gale force winds, blotted the ship from photographic view and thus there is no photo to illustrate this post. It is also too rough for the bunkering tanker to come alongside, so its stay in port may be extended.
Shortly after noon, reports reached me that a crew member was seeking asylum in Canada, which certainly creates a tense situation on the ship.
Details may follow.
Built in 1990 by Hyundai, Ulsan, the 24,606 grt / 42,263 dwtr bulk carrier is fitted with four cranes. It started life with the name Simferopol and in 1994 became Nena F. In 2012 this was shortened to Nena and it was most recently renamed in February of this year. Owners are listed as Pacific Ocean Shipping SA of Panama, but associated with Ceren Denizcilik of Turkey.

The Canadian flag Jana Desgagnés arrived this morning an anchored in Bedford Basin to await her turn at Ultramar. She had an icy trip down from Quebec - see Ship Movements from St.Johns for March 29.
http://wwwshipshots.blogspot.ca/2014/03/jana-desgagnes-stuck-outside-corner.html
The ship is built for navigation in ice, but sister ship Dara Desgagnés limped into port March 28, 2013 with ice damage to her rudder:
http://shipfax.blogspot.ca/2013/03/dara-desgagnes-limps-into-port.html

Early this afternoon the Malteseflag refrigerated cargo ship Frio Kyknos arrived, also for Asian Gypsy Moth inspection. Her arrival was not without drama however, for conditions were so bad outside that the pilot could not board the ship safely. Instead the pilot boat lead the ship in, with the pilot radioing courses to the ship to follow. Once inside Just outside Meagher's Beach, in the more sheltered confines of the harboucr, waters the pilot boarded, and the ship was brought to anchor in Bedford Basin the lower harbour.
Built in 1993 by Kitanihon Shipbuilding, Hachinoe, Japan, the ship measures 6,082 grt, 7,197 dwt, and is a typical Japanese type of reefer. It operated as Cape Blossom until 2013 when it received its present name. It is operated by Baltmed Reefer Services of Athens, Greece. These ships carry a variety of cargoes, including fish, fruit and potatoes.

Photos may follow - or not - depending on the weather. 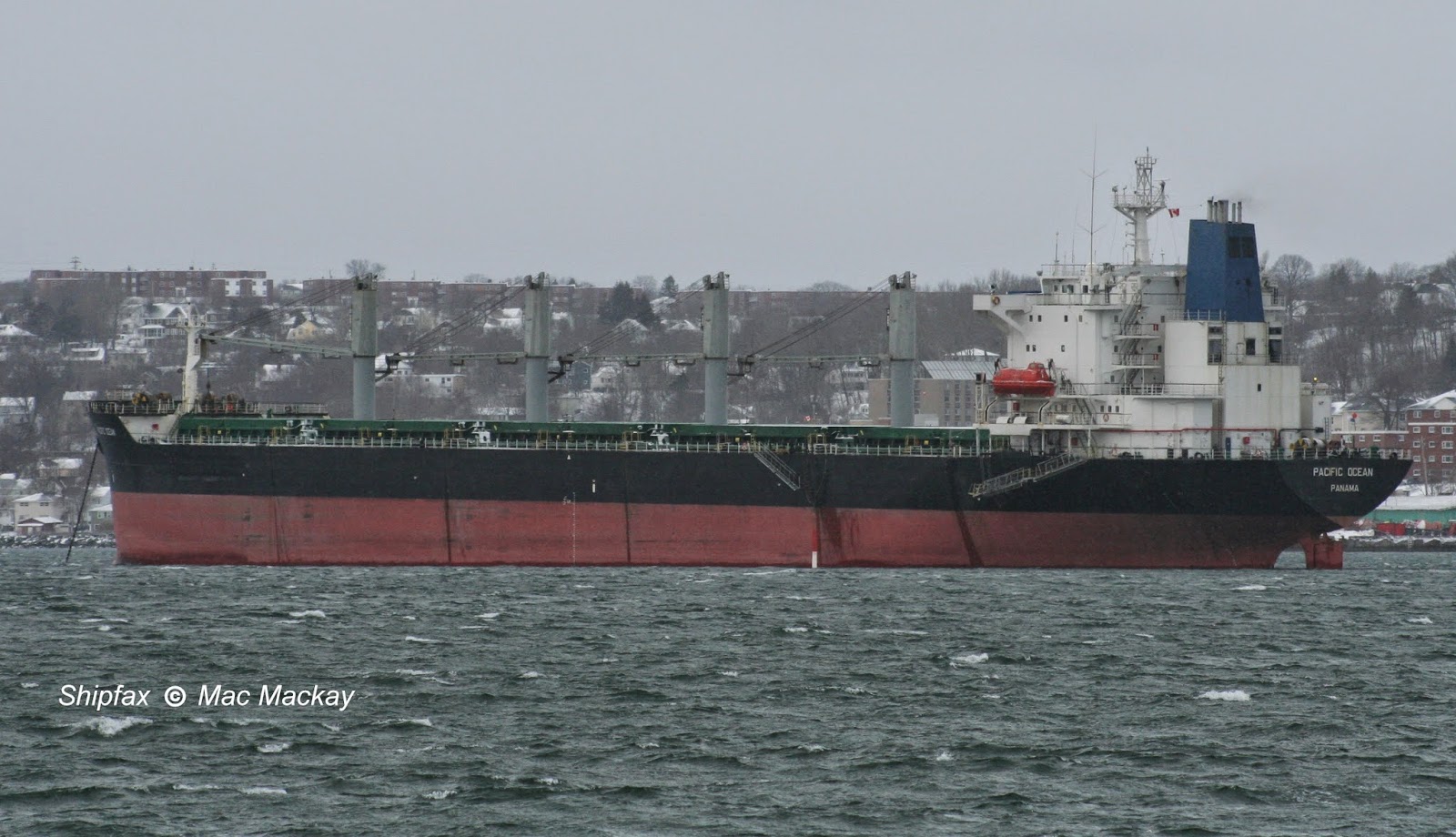 This evening, Pacific Ocean rides light at anchor, with lots of scope on the anchor cable, heading up in to the gale. Her grey painted cranes are barely visible.

Frio Kyknos rides very low. No wonder the pilot could not board outside - her side decks must have been awash. The trunked hatches and derricks are typical of Japanese reefers. Also her very fine bow, and stern designed for greater speed. Her 9,598 bhp Mitsubishi main engine can drive her at 17.8 knots.
Posted by Mac at 2:12 PM