Coastal Tankers in and out they go 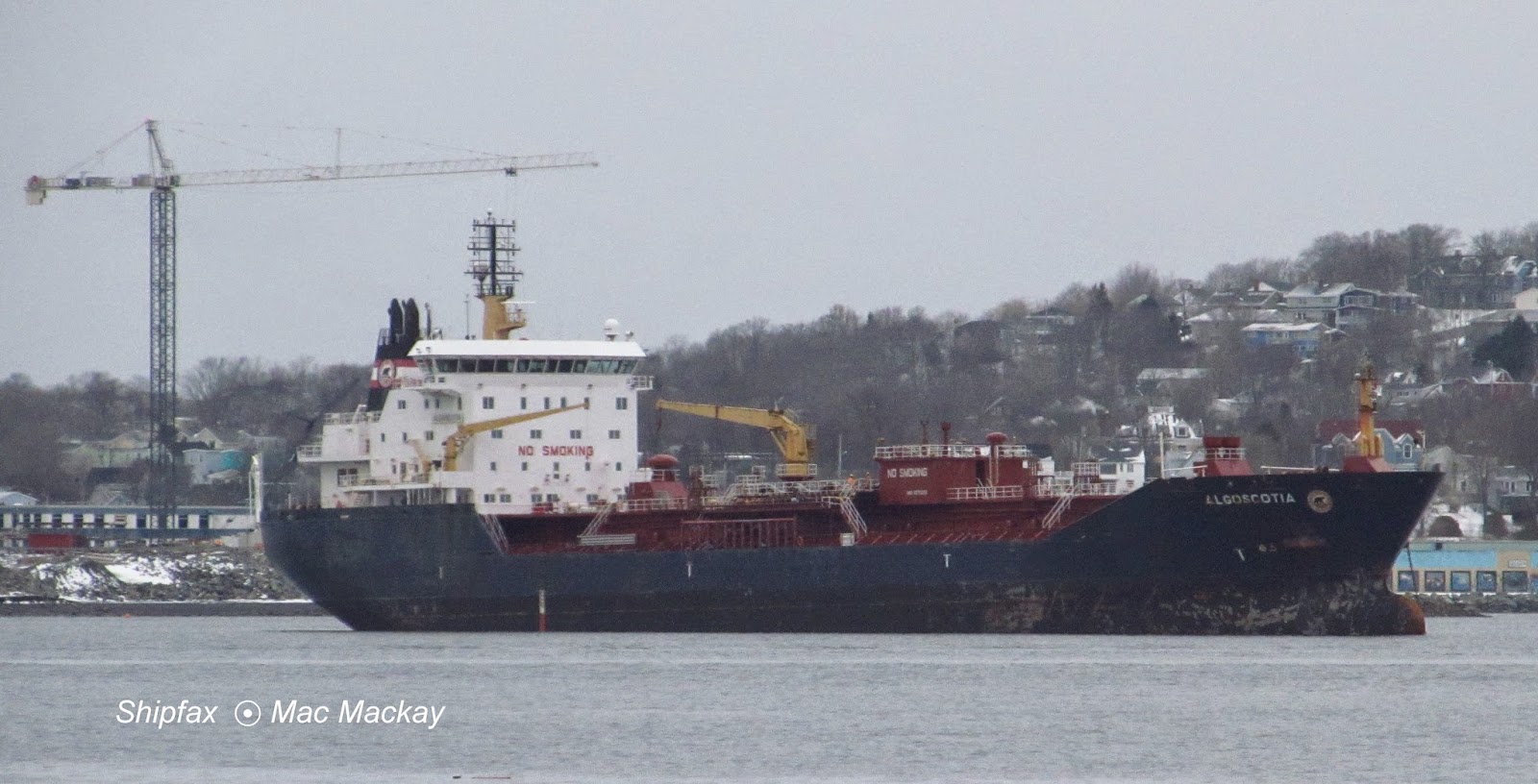 Algoscotia at anchor this morning.

The coastal tanker Algoscotia shows some signs of wear and tear on her bow, likely due to ice abrasion. The ship has been running all winter from the Valero refinery in Quebec to a variety of ports, primarily the Ultramar depot in Eastern Passage and with in-harbor shuttle runs between Ultramar and the Esso storage terminal in Dartmouth.

This is major change in trade pattern for the ship which used to run almost exclusively from Imperial Oil Dartmouth to Atlantic Canada Esso depots when Imperial's facility was a refinery..

On most visits to Halifax it also takes bunkers form fleet mate Algoma Dartmouth.
A third fleet-mate, Algonova, is undergoing major engine room repairs at the IEL dock in Dartmouth after a fire on January 19.

A miniature ship repair yard has been set up on the IEL dock to work on Algonova.
(March 29, 2014 photo)

The Jean Gaulin refinery opposite Quebec City also has charters with PetroNav, the Desgagnés tanker subsidiary to deliver refined product to Quebec ports, Newfoundland and the maritime provinces, including Halifax. Their Jana Desgagnes was at the Imperial Oil depot this week, but got away this morning before I could take a photo. Sister Dara Desganés is due tonight.

The refinery, operating by Valero markets its products under the Ultramar brand name, but also sells and trades product with Irving Oil and Imperial Oil/Esso. They receive crude oil by tanker from overseas - witness the "Cap" tankers that have called in Halifax in recent weeks.

Starting this summer however they will also be shuttling crude oil from the Alberta pipeline terminus in Montreal to the Lévis refinery using two newly acquired ships, to be operated by Transport Maritime St-Laurent Inc a new shipping company established as a joint venture with  Groupe Desgagnés.

The company has purchased two panamax tankers from Neste OY and Concordia Ship Management. Stena Poseidon and Palva were built in 2007 and each have a capacity of 500,000 bbls. Due to St.Lawrence River draft restrictions, they will likely carry only 350,000 bbls per trip.

The new Transport Maritime St-Laurent ships will fly the Canadian flag. They will be reconditioned and brought to Canada this summer.Both are familiar sights on the St.Lawrence already, with Stena Poseidon regularly running to Montreal year round. The ice class 1-A ships come from the Brodosplit Croatia yard and measure 42,810 grt and 74,927 and 74,940 dwt respectively.

Meanwhile the articulated tug / barge combination Victorious / John J.Carrick is set to sail from anchor this afternoon after wintering over in Halifax. The tanker barge, which normally carries asphalt, was brought to Halifax to supply the bunkering tanker Algoma Dartmouth when Sterling Fuels, a division of the Miller Group / McAsphalt, took over ship bunkering in Halifax. Now with all the fuel offloaded, the ship will return to the Great Lakes and Seaway where it normally operates. The combo went to anchorage #2 on April 2, and was awaiting changes to weather conditions, and possibly Cabot Strait ice.

The tug's name has an interesting background. When McAsphalt acquired their first tug/barge combination (Everlast / Norman McLeod) they partnered with Upper Lakes Shipping to operate the ship. With the second pair, Upper Lakes chose to commemorate the name of a previous ship in their group, the laker Victorious. Built in 1895 in Chicago, the 4,976 grt steamer was originally called Victory under the US flag, by the Interlake Steamship Co. When ULS acquired the ship in 1940 they modified its name to Victorious. ULS operated the ship until 1969 when it was sunk as a breakwall off the CNE in Toronto, where its remains can still be seen..