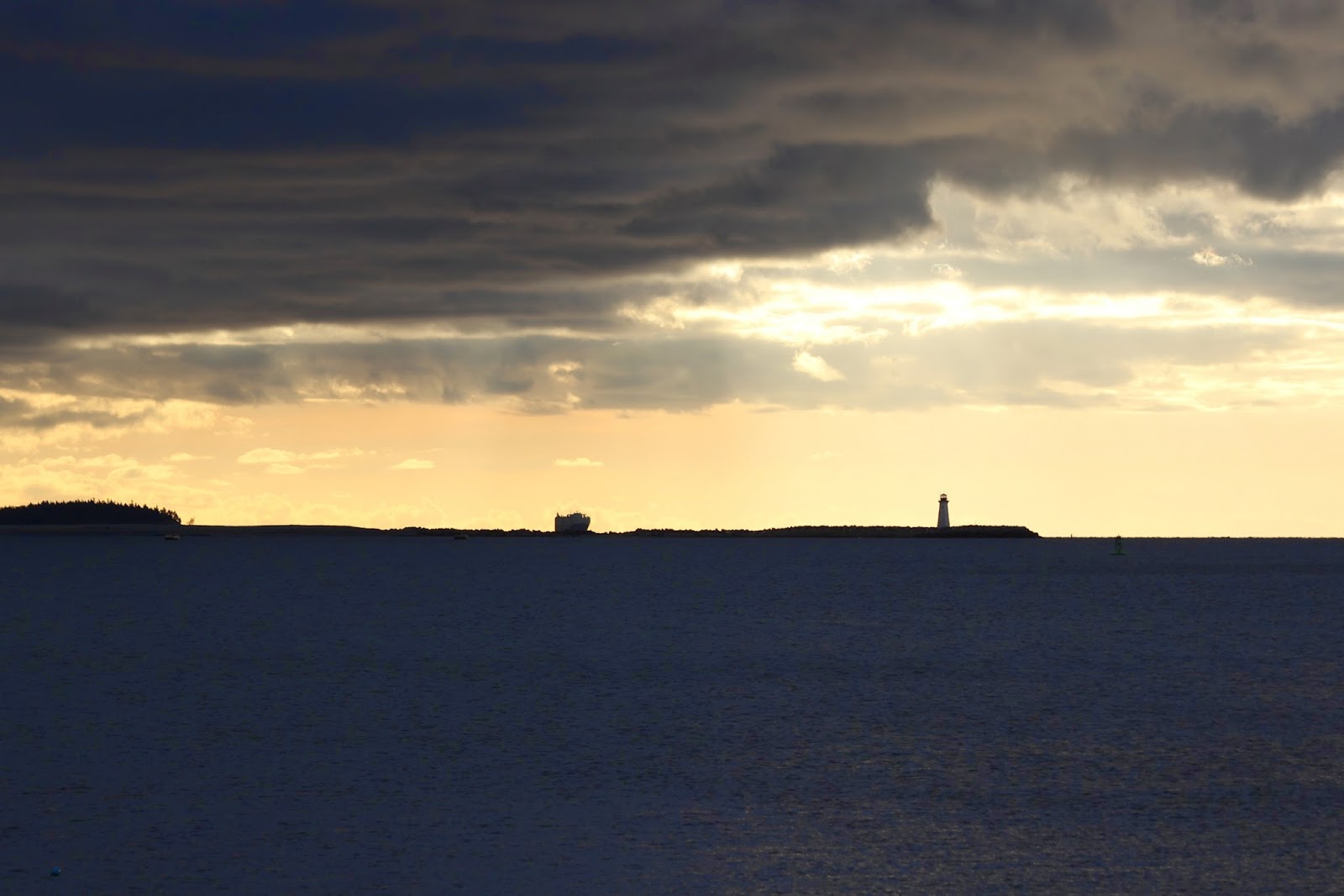 Sunrise this morning - an autocarrier waiting at anchor off Halifax.

One of the less obvious activities in the port of Halifax is Autoport, located in Eastern Passage. Owned and operated by CN Rail through Autoport Ltd it is one of a chain of Autoports throughout North America which make CN the auto manufacturers' supply chain manager of choice.

At Halifax's Autoport, the emphasis is on imported cars, but they also export domestic cars and manage almost all new vehicle deliveries to Newfoundland. When an imported car arrives Autoport provides numerous servicing functions and pre-dealer inspection, including installation of accessories. They inventory the cars in their 100+ acres of storage (and some rented overflow yards) and send them out by truck or rail for just in time delivery to the dealers.

Florida Highway at Autoport this morning. The muddy field in the foreground is often used for overflow when the fenced compound is full.

Despite the Christmas break the past week has been a typically busy one with three ships and two more due.
Today's caller, Florida Highway is a regular and has made several calls in Halifax this year. Operated by K-Line of Japan, the ship was built in 2008 by Imabari Shipbuidling of Marugame and measures 59,493 grt. It is fitted with a stern ramp and a small starboard side ramp, and it s typically slab-sided PCTC (Pure Car and Truck Carrier), but with rounded corners to - believe it or not - improve aerodynamics.

Today's cargo consisted mostly of Audis, but more than 20 brands of car can be seen at Autoport, with numerous models of each brand. Most of the cars are  European manufacture, but that can me misleading, since Toyotas built in France are brought in through Halifax..Similary the ubiquitous Ford Transit van is built in Europe, as is Dodge's competing Ram van, which is really a lightly disguised Fiat.

While statistics are hard to come by, it is generally accepted that Autoport handles upward of 190,000 vehicles a year, but sales are up over last year, so that may be low. In 2014 Autoport handled something over 115 ships, peaking in May June July with about 15 ships in each of those months.
Canadian auto sales statistics indicate that there were 266,000 imported cars sold in Canada last year, but that figure does not include SUVs, minivans and light trucks, which would boost the figure upwards of 350,000. So Autoport has a large chunk of that, since Asian built cars are usually imported by the west coast.
Another factor is that as Canada's economy is strong, the taste for cars swings toward the higher end, so sales increase for Audis, BMWs, Volvos and Mercedes (all imported solely through Halifax) not to mention Aston Martins, Maseratis, Ferraris and the like.

When Florida Highway sails this evening, it berth will not be idle for long. The waiting Green Lake will arrive first thing tomorrow morning from its anchorage position. 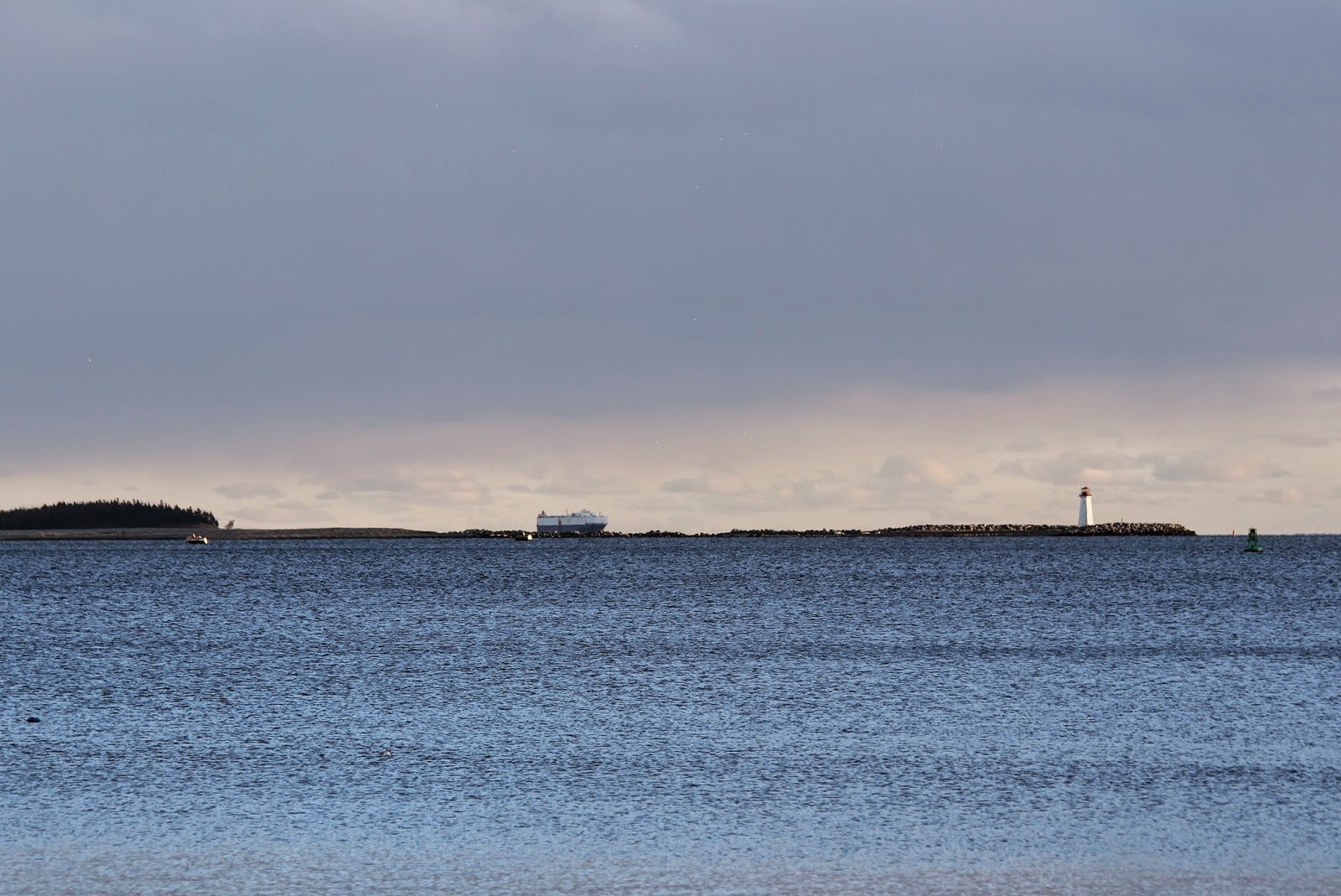 Since it opened in 1971 Autoport has welcomed a variety of autocarriers, which have evolved somewhat over the years.

Among the early dedicated autocarriers were ships like Hual Akarita. Built in 1959 as a passenger / cargo ship, Amazon, it was roughly converted in 1972, with car decks replacing the passenger decks, and its bridge structure hoisted on top. Engines and accommodations were left amidships. This monstrosity plied the sea lanes until 1980, when it was broken up in Kaohsiung.

Some of the early purpose built autocarriers were not bad looking. Dyvi Oceanic was built in Norway in 1968 and had engines and most accommodation low and aft and bridge high and forward. This was found to be an inefficient arrangement, and all accommodation on later ships was built atop the garage decks so as not to interfere with loading and unloading. In the early days the various auto manufacturers ran their own shipping lines, or at least chartered in tonnage for their own use. The ship was broken up in Kaohsiung in 1987. 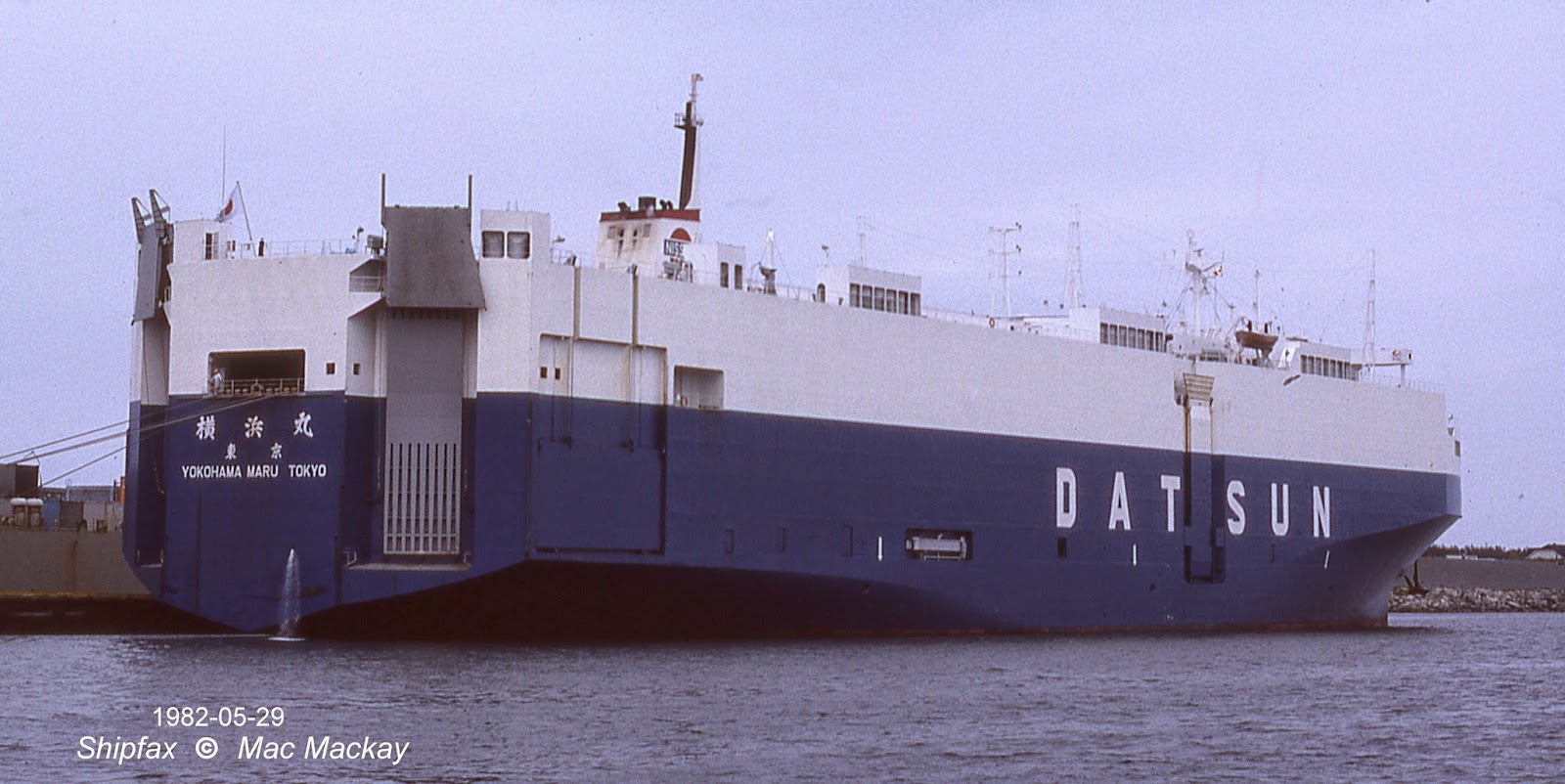 The Japanese perfected the autocarrier design, but not before experimenting with ramps on the sides and on the stern - on both quarters. They have now been standarized with starboard quarter aft ramp, and often starboard side amidships - see Florida Highway above.
The Datsun brand has now vanished  -  the company renamed itself Honda Nissan. Built in 1981  Yokohama Maru operated as Hual Trinita, Hual Trinity and Hoegh Trinity before it was scrapped in 2009.