Nova Scotia has long been the world's most productive gypsum mining area and with two ships in Halifax today, there seems to be steady demand for the product in the United States, where most of it sent for processing. The CSL International shipping pool has the contract to carry the raw ore for Gold Bond Canada Ltd (formerly National Gypsum) and CSL Tacoma sailed this morning with a load for Savannah. 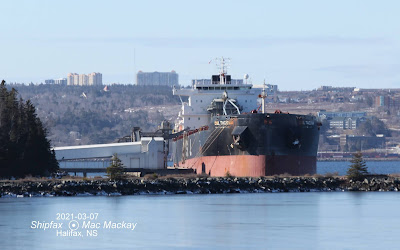 This afternoon Algoma Verity arrived from New York for more. 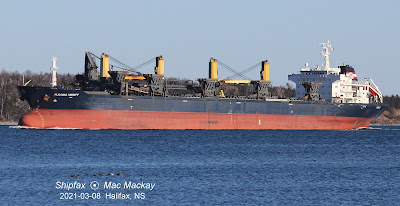 Both ships are familiar callers, and there is little need to repeat their details. However it is worth observing that two companies that are rivals for domestic Canadian cargoes have joined forces to trade internationally. To some extent it is the experience in self-unloader technology that gave them the entree into the world market, but they arrived at the partnership in an unusual way.

Canada Steamship Lines founded CSL International to export their self-unloader expertise, and partnered with Oldendorff and Klaveness for international experience. They were joined by another Canadian rival Upper Lakes Shipping, through their ULS International operation. The latter had been operating self-unloaders internationally also. CSL kept on expanding to Europe and Australia and the self-unloader pool was concentrated on the coal, aggregates and gypsum trade under CSL Americas.

Eventually Klaveness and Oldendorff moved on to other markers, and the ULS Group was divided up domestically and internationally by CSL and Algoma Central Corporation.

Now Canada Steamship Lines and Algoma are the only two Canadian Great Lakes shipping companies of any significant size, and are presumably avid competitors for domestic cargoes. However they are the partners in the CSL pool, and cooperate to carry cargoes up and down the east coast of North America.

Algoma Verity however is not a typical gravity type self-unloader found on the Great Lakes and in  other ships in the CSL pool. Instead it is a sort of hybrid, using four grab cranes to feed a conveyor system, resulting in an odd and cluttered appearance.