The fisheries research trawler CCGS Teleost was making its way inbound to tie up alongside the Bedford Institute this morning, March 7, when it developed "issues" with its controllable pitch propeller (CPP). The principal of a CPP is that the angle (or pitch) of the prop blades can be adjusted remotely from the ship's bridge, to move the ship forward, in reverse, or to exert no thrust - effectively in neutral, but without having to reverse the engine. 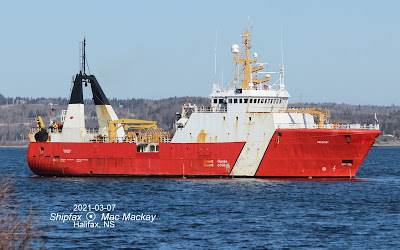 CCGS Teleost backing out into Bedford Basin this morning.

Apparently the hydraulic mechanism became stuck in reverse pitch, and the ship was not able to move forward. Instead it backed out into Bedford Basin and anchored while repairs could be made.

The Teleost was built by Langsten Slip, Tomrefjord, Norway in 1988 as the fishing factory / trawler Atlantic Champion. The Ministry of Fisheries and Oceans acquired the ship in 1993 and converted it for research, with the addition of labs and accommodation for scientists in addition to the ship's crew. It entered service in 1996, named Teleost after a species of spiny fish, and based in St.John's. As per CCGS policy it can also be  multi-tasked for Search and Rescue.

The last of three new fisheries research ships, CCGS John Cabot, arrived in St.John's, NL February 7 of this year. The second ship, CCGS Capt Jacques Cartier arrived at BIO just one year ago, on March 6, 2020. These ships were supposed to replace CCGS Alfred Needler and Teleost. 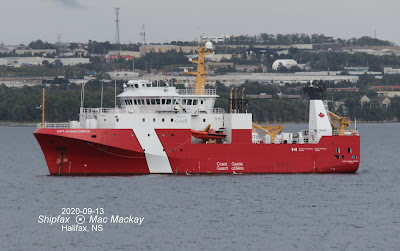 CCGS Capt Jacques Cartier was delivered a year ago, but has spent most of the time alongside.
The first ship, CCGS Sir John Franklin was delivered in 2019 and is based on the west coast. All three ships were built by Seaspan Shipyard, Vancouver under the National Shipbuilding Procurement Strategy.

By my reckoning Teleost should be preparing to decommission as CCGS John Cabot is due to enter full service this spring.

However Teleost was to be drydocked in January/ February and Alfred Needler is now in drydock in St.John's. This may mean that they will be in service for at least some time to come.