The Royal Canadian Air Force and the United States Coast Guard helicopter crews have pulled off one of the largest and most dangerous rescues in recent memory. Plucking a total of 32 27 people off the Riverport, Nova Scotia based scallop fishing trawler Atlantic Destiny, which had been on fire and was sinking, in storm conditions, and at  extreme flying range, is surely the stuff of legends.

The vessel was fishing on George's Bank, 120 miles south of Yarmouth, NS when the fire broke out. The boat's captain made the Mayday call asking for immediate assistance when the fire persisted and could not be extinguished.

I may not have all the details correct here, but from what I read and see in various media, four other nearby fishing boats stood by while two Sikorski Jayhawk helicopters from USCG Cape Cod station (Falmouth, MA)  and one RCAF Cormorant helicopter from CFB Greenwood, Nova Scotia, scrambled to the scene. Guided by a Canadian Hercules fixed wing aircraft, they reached the scene in the middle of the night with 55 knots wind and 8 meter seas to contend with.

After landing two SAR techs on board the ship, they were able to lift all but six four essential crew off by rescue baskets, one person at a time. Each helicopter was limited to about eight persons in addition to their own crew. All were landed in Yarmouth, NS (Photos show two USCG and one RCAF helo on the ground in addition to the Hercules.)

By daylight this morning it was apparent that the remaining six persons (four crew and two SAR TECHS) could not save the ship and they were evacuated to CCGS Cape Roger and headed for Shelburne, NS. The ship finally sank at about 1036 hrs AST March 3.

Atlantic Destiny was built in 2002. Construction began at Stel-Rem, Gdansk, Poland and was completed by Karstensens Skibsvaerft AS in Skagen, Denmark. The 1113 gt ship had a history of engine failures, leading up to the March 14, 2017 incident 370 km south of Yarmouth when serious mechanical damage resulted from a failed re-start  of the main engine. The Transportation Safety Board reported on that one: M17A0039

The Canadian Coast Guard's Fisheries Patrol Vessel Cape Roger is a 1255 gt ship, built in 1976 by Ferguson Industries, Pictou, NS. Although based in St.John's, NL it is frequently assigned to Nova Scotia waters, and works out of  the Bedford Institute. Although a very capable craft, its helicopter capability was removed in 2011. Its flight deck can no longer be used for landings, but only for hoisting. 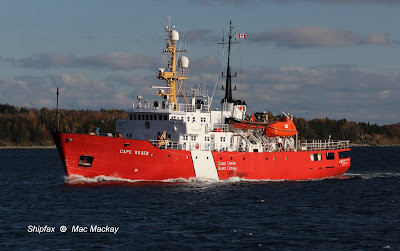 In April the Cape Roger is due to go into a six month long Vessel Life Extension process. That means that a new vessel replacement will not be expected until late in this decade or perhaps the next. The Arctic Offshore Patrol ships that have been appended to the RCN program may take up some of that slack or (more likely) extend the replacement date well into the 2030s.

Among the vessels standing by during the rescue were reported to be: Cape La Have, Maude Adams,  Atlantic Preserver and Atlantic Protector, all Nova Scotia based. 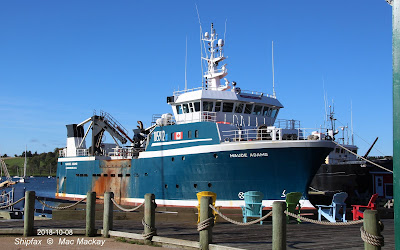 Maude Adams is typical of the new generation of stern trawling / factory scallop draggers. Much larger than the old style side draggers, they also carry a larger crew to process the shellfish on board.