Saturday Round UP, PSA, Irving Oil and Autoport

Several things were happening in the port today, so I am rounding them up into one post. 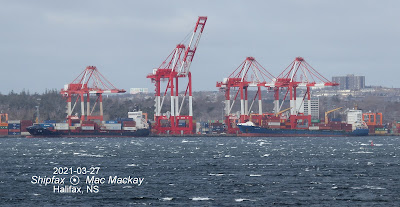 On the left, at Pier 42 EF Ava for Eimskip and on the right at Pier 41, Contship Leo for ZIM.

Contship Leo was built in 2008 by Kouan Shipbuilding Co in Taizhou, China as Vega Saturn. In 2016 it became CFS Paceno and took its present name in 2020. It appears to be owned by Syracuse Marine Ltd and operated by Contships Management Inc.

Since starting the Canada Feeder Express (CFX) service to Florida and Kingston, Jamaica in 2018, ZIM has used a variety of charters, most recently Tampa Trader and Taipei Trader.  Today's arrival, similar to Fouma on February 25 is replacing Tampa Trader, but it shows on ZIM's schedule for at least three more trips, into May. Tampa Trader is operating between Port Everglades and the Dominican Republic.

It was very windy in the harbour today and thus tankers were not docking at Imperial Oil and Irving Oil where the jetties are not considered secure. It was unusual however to see two Irving Oil tankers in port at the same time. One was due for Irving's Woodside facility and one was due for Imperial Oil. 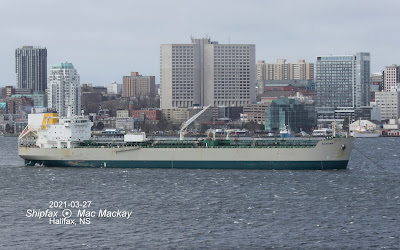 An indication of the high wind is the bar taught anchor line. The ship offloaded part of its cargo at Irving Oil and has more for Imperial Oil.

Acadian arrived Thursday night at Irving's Woodside terminal and moved out to anchor last night (Friday) as an electrical storm passed through. It is due to move to Imperial Oil when today's winds die down. 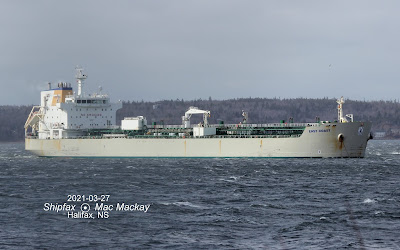 East Coast arrived this morning and was due to tie up at Woodside, but anchored instead. It will also move when conditions improve.

Although not visible from the shore the auto carrier Manon kept two tugs alongside pushing while it unloaded at Autoport. That facility also relies on a jetty and mooring lines to a buoy and is not safe during periods of high winds.

Tugs pinned the ship to the jetty while unloading.

Manon in its new Wallenius Wilhelmsen paint scheme was built as far back as 1999, but was lengthened in 2005 increasing its size to 67,264 gt, 28,360 dwt and a capacity of 7,194 RT43 cars. It was a regular caller here in its original Wallenius green and white scheme, and this is the first time I have had a chance to photograph it in the new colours.