The Fundy Rose completed its refit alongside Pier 9C and sailed for Digby this afternoon. It arrived in Halifax January 25 and is scheduled to resume service to Saint John on March 14. There were the usual annual complaints from truckers and the fishing industry in Nova Scotia, that the longer trip to the US was a major inconvenience, and financial drain. This year's refit was extended due to infrastructure work at the Saint John terminal, so even if the ship had been ready, there was work to do in Saint John. There was also a report that more work was found on Fundy Rose than originally planned.

Neither Bay Ferries, nor the federal government (owner of the ship) had any available spare ferries. Perhaps it is too much to expect commonalities between berthing piers and ships in the Atlantic region that would allow for substitutions even when the federal government also owns the ferries to the Magdalen Islands, for example.

Passengers wishing to use the Digby - Saint John service must be aware of the severe travel restrictions imposed by New Brunswick and Nova Scotia because of COVID-19. Reservations are required and in the case of New Brunswick a government travel permit is needed, and for Nova Scotia, visitors must self isolate for 14 days on arrival. 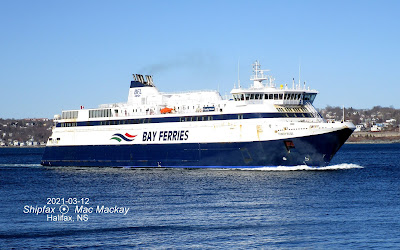 Fundy Rose has been a regular visitor to Halifax for its annual refits ever since its first visit in 2014. it was then called Canada 2014, a temporary name replacing its original name until a new permanent name could selected. I have posted about the ship and its history several times, but the following seems to summarize it: July 13, 2015

The photo accompanying that post shows a different paint scheme - a red boot topping, which has now become a light blue, and a lighter blue hull colour. There is a white on blue graphic versus the present blue letters on white with three colours of "swoops".  This is the 2015 version from a different angle:

I prefer the colours to follow the deck lines on ships, but have to agree that the white on blue graphic was not terribly exciting.
The new colour scheme was apparently applied in 2020 or perhaps during and unscheduled October 15 - December 5 2019 refit,  but I don't know where or when.
.