Business as usual - for now

The container business is in disarray at the moment with the Suez Canal blocked by a grounded ship, and longshore labour uncertainty in Montreal. So far at least the Port of Halifax is keeping up, but that may be starting to change.

A PSA Halifax today Maersk Patras was working at Per 42. It would normally have called on Saturday, but both berths were occupied yesterday, so a one day delay is not too serious. 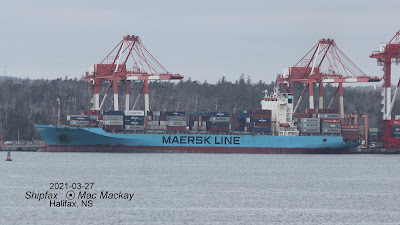 The ship is on its usual eastbound run from Montreal, although there have been several missed calls over the winter. However its fleet mate Maersk Penang on its westbound run is not going to Montreal, but is instead arriving in Saint John today. It is still giving Halifax next weekend eastbound. It may be a blow to terminal operators PSA Halifax not to get all the westbound cargo, but I speculate that it might overwhelm the capacity of the terminal, what with other diversions also possible. 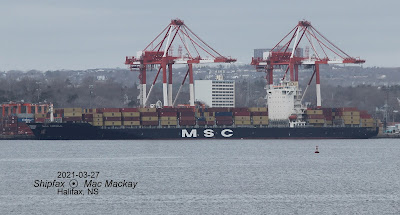 Also at PSA Halifax today is MSC Angela, another ship that is due to sail to Montreal, after reducing draft in Halifax by unloading some cargo. The ship has been sitting at anchor off Halifax since March 18. Perhaps waiting for developments in the Montreal situation. Fleet mate MSC Annick is standing by off Halifax. 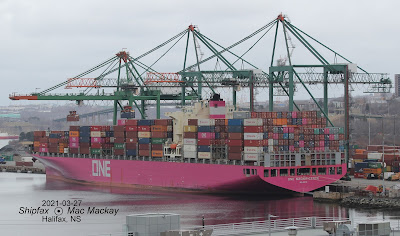 Meanwhile at Fairview Cove ONE Magnificence is back on THE Alliance EC5 service. It is scheduled to arrive at the Suez Canal April 8, with its next port Jebel Ali on April 16. Whether the Canal will be re-opened and the traffic backlog cleared remains to be seen. There are reports that more than 300 ships are now waiting to transit, even with many diversions already sent via the Cape of Good Hope.