MSC Eleni emerging from a snow shower.
Despite a short snow shower than came close to "white-out" conditions, my foray to Ferguson's Cove this morning paid off with photos of two of today's three arrivals. The reason for the "off peninsula" trip was to get around a potentially awkward sun angle. Around the 1000 hrs - 1030 hrs AST* pilot times the sun would have been directly behind the ships, making for undesirable silhouette photos.

The first of three arrivals this morning was Maersk Palermo, a repeat customer, but the first Maersk in many weeks as the St.Lawrence service was avoiding Halifax. Due to ice conditions on the St.Lawrence River and Gulf, the ships were often late arriving and sailing from Montreal, and in order to maintain a semblance of their schedule they have been skipping their customary eastbound Halifax top up. Maersk Palermo arrived at 0600 - too dark (and too early) for photos.

The next arrivals, MSC Eleni and Elektra arrived in quick succession. MSC Eleni has become a regular now that MSC ships call in Halifax to decant and top off cargo to meet St.Lawrence River draft limitations. The ship did make a "one of" visit December 8, 2019, then made its first regular call January 21 of this year.

A well laden MSC Eleni picking up its tug in the Middle Ground area.

Among auto carriers the Wallenius owned Elektra certainly qualifies as a regular, having been here countless times since it was built in 1999. Today's arrival was my first chance to catch the ship in the Wallenius Wilhelmsen paint scheme. The Wallenius ships (named for operatic characters) carried an attractive deep green and white hull, as seen in this 2018 photo:

Now that the two companies have merged their operations formally after years of cooperation they have adopted a new scheme. It is being applied as ships undergo regular dry dockings and maintenance. 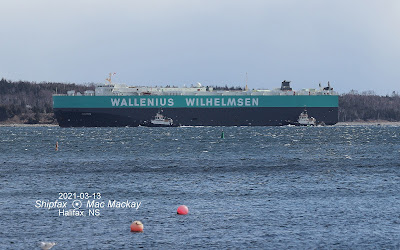 As seen from Purcell's Cove, Elektra shows off the new colour scheme.

Both Wallenius and Wilhelmsen are bringing ships out of cold layup as auto manufacturing and sales are rebounding from COV-19.

Just for the record I am not impressed with the new scheme, which I think is insipid. I call for a return to the "heritage" colours.