The Southend Container Terminal operated by PSA Halifax was a busy spot today, with ships waiting. Unseasonably cold weather may have been a factor. Coupled with a stiff northwest wind there was frozen spray on at least one of the arriving ships. The Icelandic Selfoss was coated with a thin, transparent film of spray on arrival early this morning. 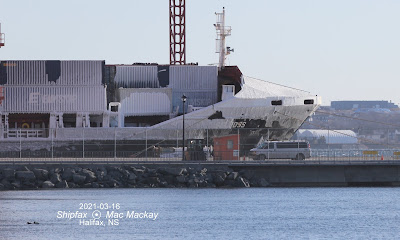 Two other morning arrivals were obliged to wait for a berth. Melfi Llins' X-press Irazu anchored in the lower harbour and will likely be waiting until tomorrow to berth. 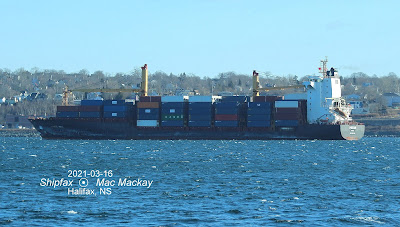 MSC Rochelle stood by in number one anchorage for an hour or so until its designated berth was clear. The ship was arriving from Montreal to top up its cargo before sailing to Spain.

The hold up was caused by CMA CGM J.Adams which was scheduled to sail during the night. That ETD was pushed back to 0900 hrs this morning,  then delayed again as the ship did not get underway until 1100 hrs.

Built in 2017 by Hyundai, Ulsan, the 140,872 gt, 148,992 dwt ship has a container capacity of 14,414 TEU. It is one of the largest ships to call in Halifax, and despite additional berth space and large cranes, its size must pose challenges for PSA Halifax to work the ship quickly.

Meanwhile at Pier 34 there was a clear sign of spring as the Canada Steamship Lines bulker Baie St.Paul got underway after a short "winter layup'. Great Lakes ships usually layup for a period of time during the winter when ice forms on the lakes and canals and the St.Lawrence Seaway is closed. Even ships such as Baie St.Paul, which spends much of its life in the Gulf and along the coast, takes a brief respite. It arrived here on February 25 and has been undergoing maintenance.

Baie St.Paul moved to Gold Bond Gypsum's* pier in Bedford Basin this morning to load, likely for Hamilton, ON. According to reliable sources the ship will be the first ship of the year to enter the St.Lawrence Seaway at St-Lambert, QC, when the system opens for the season next Monday, March 22.

* National Gypsum recently renamed itself using the trade name of its well known gypsum products. Founded in Buffalo, New York, the company operates the world's largest open pit gypsum mine in Milford, NS. The ore is transported by rail to Halifax where it is stockpiled at Wright's Cove, then shipped to Gold Bond factories in several locations on the US coast as far south as Tampa, FL. It is also shipped in smaller quantities to Montreal and ports on the Great Lakes.

A competitor, United States Gypsum (USG), and its Canadian arm Canadian Gypsum Co (CGC) are no longer active in Nova Scotia. Their mines in Wentwortth (near Windsor, NS), load out facility in Hantsport, and mine and port in Little Narrows, remain shuttered after several years of inactivity. As the time goes on there is less and less chance that they will be reactivated.