With the harbour activity shut down most of the day yesterday due to high winds, there were several ship movements after dark, and some catching up this morning. The early morning arrival was Pictor for Eimskip. The former Pictor J until last year is inbound from Iceland and heading for Portland, ME. For details see previous post: http://shipfax.blogspot.com/2021/01/pictor-catching-up-with-eimskip.html 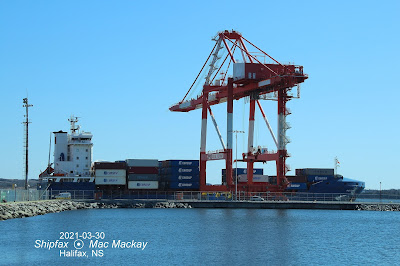 Pictor at the extended section of Pier 42, PSA Halifax.
Finally arriving at Autoport this morning, Siem Confucius had been loitering offshore since at least March 27, when I first noticed the ship's AIS signal. The ship never anchored but ranged up and down along the cost, sometimes drifting, sometimes hove to, and when weather was bad, steaming upwind. 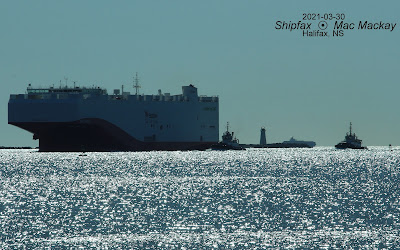 As the tugs Atlantic Willow and Atlantic Oak prepare to make up at bow and stern (respectively) of Siem Confucius, the container ship MSC Annick is visible on the horizon returning to anchorage.
Siem Confucius was not alone outside the port limits. The container ship MSC Annick, which had been at anchor put out to sea during the high winds and also hove to or steamed back and forth. It returned to anchorage this morning. As with several MSC ships recently it has spend prolonged periods off Halifax.[see previous posts] .
Siem Confucius has called in Halifax before: http://shipfax.blogspot.com/2020/06/siem-confucious-revolutionary-car.html