An Ontario company is proposing a container feeder service between Halifax and the port of Picton, Ontario, which the company manages. Based on the European model of "short sea shipping" the proponents hope to run a 300 TEU operation weekly, picking up and delivering containers from Halifax to the Lake Ontario port, which would be closer to their inland destinations.

The various Doornekamp companies have invested heavily in aggregates, tugs, barges and port infrastructure, and one wishes them well. However history does not seem to be on their side. Transiting the St.Lawrence Seaway is a cumbersome and time consuming (not to mention seasonal) process, and has proven to be an insurmountable obstacle in the past. Manchester Liners service in the 1970s is one example. 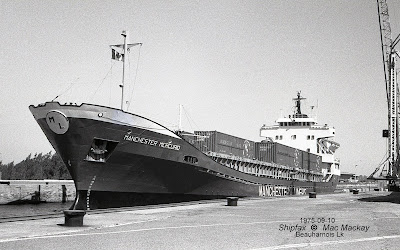 Manchester Mercurio was 1997 gt, 2792 dwt 150 TEU ship built in 1971 in Spain. It and a sister ship Manchester Rapido ran a Montreal / Cleveland / Detroit / Milwaukee / Chicago feeder from 1971 until 1981, but was discontinued amidst a huge shakeup in shipping line ownership, a trade recession and rail alliances. Since then no real "liner" services have served the Lakes, except for perhaps Spliethoff's occasional mixed breakbulk service.

Trying to keep a weekly schedule will require a speedy ship (remember the speed restrictions in the Gulf to protect the whale population?), or more likely two, and a guaranteed slot somewhere in Halifax to pick up boxes from either or both of the two terminals or from a third party operation. There will also be competition for rates from rail lines (include the re-awakened CP Rail / Saint John in this equation).

I don't wish to second guess the planning for this new and as yet nameless service, but it seems to me that a lot of the details have yet to be worked out. It is possible that they have a shipping line partner in the project - I can think of one - and if so they might be able to make it work. And perhaps they have already lined up customers and done their marketing homework.

One potential problem area is the "dwell time" issue. As it stands now, containers offloaded from deep sea ships in Halifax are usually aboard a train and en route to mid-Canada or the US within three days at most - (currently in excess of 90% in 72 hours). The boxes are not sitting around occupying valuable space in a container terminal waiting for a weekly calling feeder ship to show up. Plunking the boxes on a train with an RTG is considerably easier than storing them for a week then re-loading them on another ship using big container cranes that may be needed to work larger ships (which will have priority). Or perhaps moving import boxes around city streets in Halifax on trucks from one terminal to another or a third pier. On top of which the box will reach its inland destination more quickly on a train no matter how punctual the feeder ship. The same applies to export boxes.

As I say I wish them well, but colour me skeptical.