A ship with an unusual name is offloading at Imperial Oil's number 3 dock. Yasa Swan is otherwise a typical MidRange tanker of 29,681 gt, 50,215 dwt, built in 2019 by Hyundai Mipo, Ulsan. 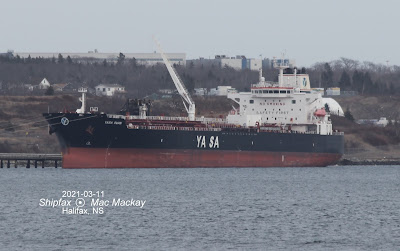 The ship is operated by Ya Sa Tankers (sometimes rendered as Ya-Sa), a six ship fleet based in Instanbul. It is part of the Ya-Sa Group which also owns twenty some bulk carriers and has interests in construction, tourism, aviation and textiles.  It is named for its founder Yalcin Sabanci, a member of the Sabanci family, one of the wealthiest in Turkey. Some members of the large (and sometimes squabbling) clan are found on the Forbes billionaires list and wield considerable influence in world affairs.
Yasa Swan arrived from Antwerp March 9 and has a pilot order for 2330 hrs tonight, March 11. In 2020 the ship called in Canadian ports on the St.Lawrence River and at Point Tupper, sailing out of Dutch and German ports. This is its first call in Halifax.
.