The Algerain ship Imedghassen finally sailed this evening after being under repair since it arrived  January 9, 2021: http://shipfax.blogspot.com/2021/01/new-for-melfi-imedghassen.html

Initially Imedghassen tied up at Pier 34, but on February 24 it was moved by tugs to Pier 9C where it has remained until today. 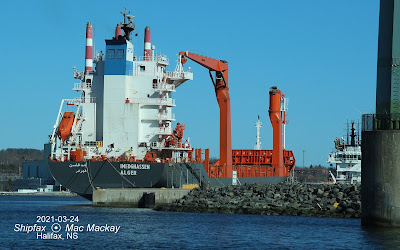 Imedghassen at the far north end of Pier 9C yesterday.
(Those red and white smoke stacks are not! part of the ship)

The ship came to Halifax to take up a charter with Melfi Marine, which runs a container and general cargo service from Italy, Spain and Portugal to Cuba, calling in Halifax westbound. However due to a defect in its air compressor system, which prevented stopping and reversing the main engine, the ship was unable to take up the charter. X-press Irazu took its place, joining Macao Strait. The Melfi ships usually call in Halifax twice a month. However the next call will not be until April 30 as Macao Strait will bypass on its next voyage 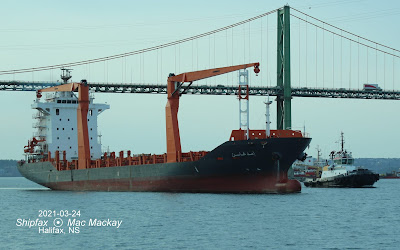 With assistance from Atlantic Willow, the Imedghassen underway from Pier 9C bound for Ceuta, Spain shortly after 1800 hrs ADT this evening.