The crude oil tanker Ridgebury Lindy B, the subject of yesterday's post sailed this evening, just about 24 hours after anchoring. 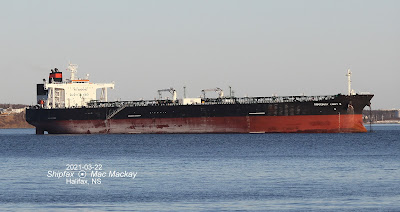 Interesting that the ship is giving Come by Chance, Newfoundland as its destination. The refinery there, operated by North Atlantic Refining Ltd (NARL), has been in warm idle since March 2020, and  is not importing crude oil for refining. However it is operating as an import terminal. Since Ridgebury Lindy B is in ballast one can only assume that it will be loading crude oil from NARL's import storage.

Update: In fact the ship loaded at Whiffen Head, the storage and transfer facility for crude oil from offshore Newfoundland.

The current owner of NARL  a New York based investment company, has been trying to sell the 135,000 barrel per day refinery. In recent months several companies have expressed interest in acquiring the facility and NARL's  retail gasoline, diesel and furnace oil business in Newfoundland. So far there is no indication if or when NARL will re-start operations. Most observers believe that it is closed for good.
Update 2
With spring like temperatures in the mid-teens today, the crew of the former Siem Hanne were able to paint the ship's new name PSV Hakan on the bow. They have painted over the old name on the stern, but have left the new name for tomorrow. 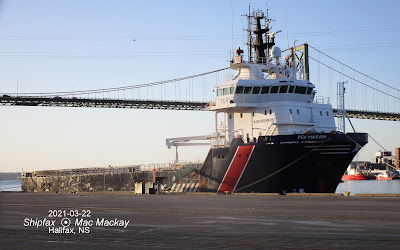 Siem Offshore, the Norwegian parent of Secunda Canada LP, has sold the ship to as yet unidentified buyers, who will be sending the ship to Turkey. Speculation that the vessel might be scrapped seems unjustified, as the ship did DP trials in Bedford Basin March 5 before moving to Pier 9C. Also renaming the ship with the prefix PSV (industry abbreviation for Platform Supply Vessel) would seem to indicate that it will continue in use.
.
Posted by Mac at 8:07 PM