Latest reports indicate that the cost of the CCGS Hudson replacement has ballooned from the original estimate of $85 million to $765 million. Something has to be frightfully wrong if either or both of those numbers are correct. 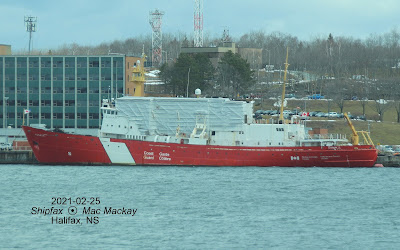 CCGS Hudson presently out of service - again - for more refit work - is cocooned at the Bedford Institute.

The Hudson, commissioned in 1964 has been the subject of much refit activity in recently while the Department of Fisheries & Oceans and the Coast Guard try to eke more years out of it.  After the latest  refit it was estimated that its life had only been extended to 2024. However construction of its replacement has not even been started yet.

The Coast Guard recently announced the award of a $453.8 mn contract to  Seaspan to "transition from the design phase to full construction". Construction is start in spring 2021 for delivery in 2024. Pardon my pessimism, but I suspect the 2024 date is very optimistic. It represents an expenditure of more than $20mn a month for three years - I say impossible.

Long delays in getting the replacement started (by building CCGS Capt. Jacques Cartier and CCGS John Cabot as learner ships)  should have begin to pay off by now in lowering costs.

As  I see it there are several issues.

1. Poor estimating. Whoever came up with that original number either knew not how to estimate for government shipbuilding or intentionally low balled the number, not taking into account factors 2 and 3 below. Also, inflation is not impossible to estimate, but it is rarely figured in costs, since it can double the figure in five to ten years. Giving an estimate in current dollars is folly, knowing it will take at least ten years to design and build a ship.

2. Poor project definition. The history of recent Canadian shipbuilding is that custom designed ships tend to become "all things to all people". There seems to be no discipline to distinguish between "wish lists" and "need lists". Even off the shelf designs must go through an inflated "Canadianization" process, some of which is completely bogus.

3. Immature shipbuilding industry. The bill has now come due for the decades of neglect by governments and their refusal to support a national shipbuilding industry. The industry has now been restarted, almost from from scratch, and investment is required in all aspects from plant to people. That investment cannot be spread over decades, but must be made up front before ships are built.

Under current policy the industry has little if any incentive to be economical on major contracts, since there is no competition either with Canadian rivals or others. Overseers lack experience in managing major contracts of these types, and so will not be able to control costs.

If all this sounds familiar, it will become even more so as the estimates start coming in for the RCN frigates and supply ships. Those numbers will make the Hudson costs look like a dingy on a yacht.

In fact I believe the current National Shipbuilding strategy is in want of a serious review. Most military shipbuilding around the world is in a mess (see the US, Great Britain and Australia as examples). even commercial shipbuilding for government clients (see the Societe des TraversIers du Quebec) has had its issues with costs and or quality. So I don't see  a magic solution, but much tighter control is needed and perhaps some lowered expectations.