On March 23 the ultra large container ship Ever Given drove its bow into one bank of the Suez Canal. Its stern then swung outward, effectively blocking one of the world's busiest waterways. Initial efforts by tugs could not dislodge the ship, and traffic began to build up in both directions.

So much for the facts. Media coverage of this event has ranged (sadly) from the bizarre to perceptive, with even my beloved CBC national radio news dropping the ball in initial reports. I won't dwell too much on the CBC's clangers, but the error filled report included having the ship "tip over". The account must have been written by a summer intern from the prairies left alone on the graveyard shift.

I have been guilty of many errors in this blog (see previous post about the mv Arctic), but I am not a professional journalist, nor am I a shipping industry insider. I am merely an informed enthusiast expressing my opinions and relaying such information as I have been able to gather, and (usually) to confirm. News organizations should be able to do better than rip it off the wire service, even in the middle of the night. Bottom line: don't rely on one source (like me) for news.

The Ever Given has a capacity of more than 20,000 TEU. The largest container ships to call in Halifax are in the 15,000 TEU range, so the ship is an immense one. In fact it is 400 meters in length. Surely the average adult human can relate to that many meters in some way. Nevertheless some journalists insist on converting meters to new units of measurement such as the Football Pitch (presumably European, but maybe American or even Canadian?).  I haven't heard of the Hockey Rink unit yet, but I am waiting. My favourite unit of all is the "Eiffel" as if the innumerate listener can cope with the concept of the Eiffel Tower (324 meters) fallen on its side and blocking the Seine. (It would if it did.)

Yes it's a big ship, but the point is its a big ship in a narrow waterway. The implication of a big ship stuck in a narrow waterway was not lost on the early reporters of the incident. But those that passed the news on, like a game of multi-lingual telephone, missed the point about this particular waterway. It carries a high proportion of the world's goods and fuel, and blockage of even a few days will disrupt world trade, right down to the price of gasoline at the pump and availability of certain goods.

Refloating the ship is a monumental headache since there is no realistic way of lightening it by offloading in any kind of a hurry. Dredging around and under may be the only practical way, but even that is fraught with danger as an over stressed hull could fracture.

Alternative trade routes present onerous barriers, and are generally out of the question unless there is a prolonged closure. Britain and much of the western world was put on a war footing when President Nasser of Egypt nationalized the Canal in 1956. Called the Suez Crisis, it came close to involving the major super powers in open conflict. As it was Britain and France invaded Egypt to secure the canal for international trade. Egypt won however and the United Nations created a peacekeeping force (including Canada) to safeguard the Canal while clean up efforts to remove wrecks took months.

Then again the Arab-Israeli Six Day war in 1967 closed the Suez Canal for eight years and spawned a whole new concept in shipbuilding. Super tankers were built to make the much longer trip around the Cape of Good Hope to feed the western word's need for crude oil. But in those days Asian countries were not the major producers of the world's trade goods as they are today. In fact most such goods were produced in Europe and North America, and container ships were barely heard of. Even then the world economy took a major hit and a long time to recover. The trade implications for a prolonged Suez closure these days are therefore pretty severe with the quantity of goods sourced in Asia for Europe and North America.

The distance between Mumbai and London via Suez is 6,200 nautical miles. Via the Cape the distance is 10,800 miles. That approximates two weeks of steaming time for an average ship. At say $20,000 per day to operate a ship that's an extra $280,000 per trip, and perhaps much more for a larger ship.

There is no easy work around to a closure. With west coast US ports clogged due to Covid related issues, a transpacific alternative is highly unlikely, but shippers must be weighing all the options at this point, including transpacific /Panama. Normally however it takes many months to position ships for radical schedule changes.

The Suez Canal Authority (SCA) has been continually upgrading and expanding but has not been able to keep up with the growth in the size of ships. The current situation will not halt ship owners from building larger ships nor will the SCA catch up with the boom in shipbuilding. Incidents such as the current one with the Ever Given can be expected to recur, even with increased tug escorts and other safety measures that mat ensue.

How will Halifax be effected you may ask?

As it happens today's lone container ship arrival * was at PSA Halifax where the  APL Dublin tied up centre berth, straddling Pier 41-42. Its last port of call was Colombo, Sri Lanka, sailing directly to Halifax non-stop via the Suez Canal. 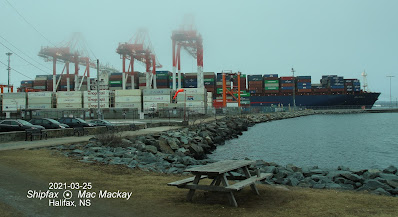 The next ship on the CMA CGM Columbus JAX service, CMA CGM Mexico is due to sail from Colombo today, and is expected at Suez April 4. Even if Ever Given is freed in a very few days, the CMA CGM ship will be caught up in the backlog of waiting ships that in itself will take additional weeks to clear.

Many other ships that call in Halifax have cargo that originates in Asia but that has been transferred in the Mediterranean or elsewhere in Europe, so we may expect those ships to come with very much lighter loads.  As it is there is a huge demand for container ships that cannot be met with the current world supply. The Suez closure will make maters worse, and there will be all sorts of service disruptions, delays and cancelled sailings.

* There was another container ship arrival today, but it did not actually enter port. MSC Annick anchored off Chebucto Head, outside the port limits, joining MSC Angela. Both ships are destined for Montreal, but labour uncertainty in that port may keep the ships here for some time.  MSC's Montreal schedules are in disarray as it is, and certainly the CANEX 1 (Western Mediterranean-Canada) service will not be helped by the Suez situation.