The container ship MSC Veronique tied up at PSA Halifax this morning after better than two weeks anchored outside the port. The ship arrived from Sines, Portugal on March 7 and has been at anchor or hove to at sea ever since. [The ship went out to sea as a storm passed, since the anchorage area is not considered suitable in periods of high winds.] 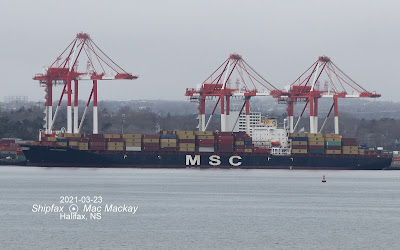 The ship appears to be fully loaded, so customers awaiting their cargo must be getting impatient by now. I am no expert on the intricacies of MSC scheduling, but the ship appears to be part of the CANEX 1 service, which is West Mediterranean-Canada run from Malta, Naples, Leghorn, Genoa and Sines to Montreal, with top off and decanting for draft in Halifax eastbound and westbound.
The extended stay at anchor is almost certainly related to labour issues in Montreal. Longshore workers there have once again failed to agree to terms with employers and have withdrawn their services. It seems to be a re-run of last August's shutdown in Montreal which jammed the port of Halifax with diverted containers and took CN Rail some time to clear.
Another MSC ship, MSC Angela is also anchored off Halifax. It arrived March 18, and seems to be on the CANEX 2 service which runs Valencia, Halifax, Montreal, Halifax, Barcelona.

It was a double header day at Cerescorp's Fairview Cover terminal with two MOL ships in quick succession. MOL Maneuver 6724 TEU arrived early this morning and was off the berth again by 1530 hrs. It moved well out into Bedford Basin to leave for the inbound. Once clear it proceeded outbound for New York. 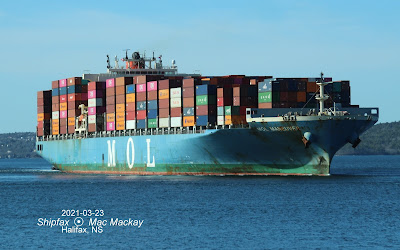 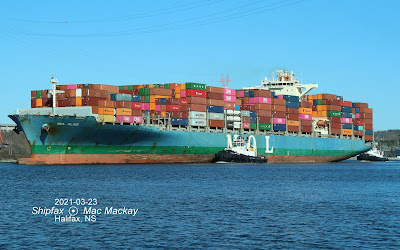 MOL Glide only began calling here in January, and this was my first chance to see it underway. Both ships are part of Ocean Network Express (ONE) which is a partner in THE Alliance with HAPAG-Lloyd, Hyundai Merchant Marine and Yang Ming.