After two months of winter layup at Pier 25-26 the tanker Algonorth is scheduled to sail this evening. With the opening of the St.Lawrence Seaway scheduled for Friday, it is likely that the ship is headed for the Great Lakes. However it will be making an unusual stop at the Valero refinery in St-Romuald, QC, en route. 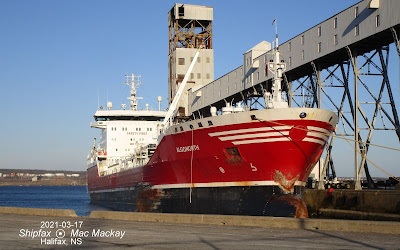 Algoma Tankers acquired the ship late in 2018 on the strength of a "long-term contract with a strong counterparty" according to a company press release of the time. Since then it has operated from the Imperial Oil (Esso) refineries in Sarnia and Nanticoke, delivering clean product on the Great Lakes, St.Lawrence and east coast.

The ship is an oddity in the Algoma fleet because it is still carrying the red and white hull colour of its previous Swedish owners. Built in 2008 by Tuzla Gemi Endustri in Turkey as Gan-Gesture, it was renamed Ramira in 2009 by Rederi AB Alvtank of Gothenburg. They applied the red paint which has stood up relatively well, but it is time to do some touch ups and it will be interesting to see if the ship will be adopting Algoma's normal deep blue hull colour.

The ship arrived at Imperial Oil, number 3 dock January 3, 2021, from Nanticoke, ON - the lat ship to exit the St. Lawrence Seaway System in 2020 and laid up January 4. Despite having a high ice class, the ship was not needed the winter, and remained laid up until today.