Both Irving Oil and Imperial Oil had tankers in today.

Nave Equinox arrived at Imperial's number 3 dock early yesterday morning after several days holding off in bad weather. Built in 2007 by STX Shipbuilding Co in Jinhae, it worked as Indigo Point until 2013. It is a 30,119 gt, 50,922 dwt product tanker. One notable feature of the ship is its full width enclosed bridge, which usually indicates that it will be working in cold environments, and indeed it is rated as Ice Class 1A by Bureau Veritas. 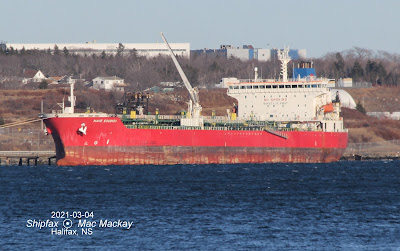 The ship's last port is showing as Port Neches, Texas (between Port Arthur and Beaumont), an area hard hit by the recent snow and freezing weather. Several refineries in the area had to shut down, affecting about 25% of US refining capacity.
This afternoon Elka Sirius made a return visit. I recorded the ship's arrival here December 19, 2014, which may have been its first call. That time it was for Imperial Oil - this time it is coming from Rotterdam for Irving Oil. 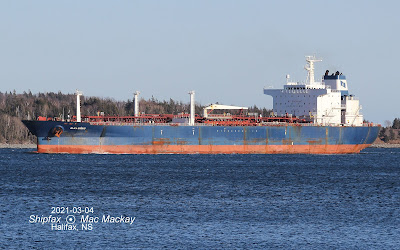 Built at Brodosplit in Croatia in 2003, the ship carried the name Stinice until 2005 when it was renamed by European Product Carriers Ltd. A 30,770 gt, 45,467 dwt vessel , it is arriving with a part load, having already discharged some cargo in Saint John, NB.
It felt a bit like spring today, with bright sunshine, so it was not surprising that there were several boat and vessel exercises going on with Coast Guard, Navy and private vessels participating. 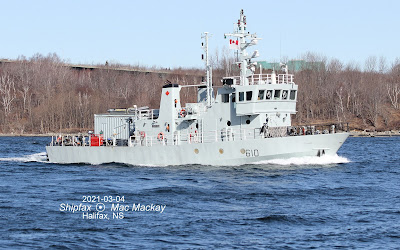 The Royal Canadian Naval Auxiliary Vessel YDT 610 Sechelt, which is operated by the Fleet Diving Unit Atlantic, based at Shearwater, made a brief foray into Bedford Basin. Its "west coast" name is accounted for by the fact that it was built as a torpedo recovery vessel for Nanoose Bay, but was converted and transferred to Halifax.
A former Fisheries Patrol, Leeway Odyssey was exercising at the harbour mouth. Built in 1977 as Cape Harrison it also served as CCGS Louis M. Lauzier from 1983 to 2014. It is now a research vessel for hire. 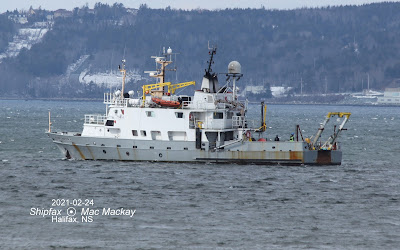 Other vessels in the area included HMCS Summerside and RMI Seafox.
.