Baie St.Paul with the last of the salt

The CSL self-unloader Baie St.Paul discharged what I believe is the last load of winter road salt at Pier 9C today. The ship was due at the Halifax pilot station at 0030 hrs this morning September 20. It would have tied up at the dock around 0200hrs, having sailed into Bedford Basin, turned and secured starboard side to the dock.  It likely started to unload within minutes. By 0800 hrs unloading was complete, and a pilot was ordered for 0900 hrs. I took the photo below at 0851 hrs. In the event the ship did not sail until after 1000 hrs.

This was the fourth load of salt that the ship has delivered from the mine in the Magdalen Islands. And unlike the City of Summerside, PE where the mayor has banned the unsightly stockpiling of salt on the public waterfront, the Port of Halifax has found a suitable and unobtrusive location for this stash of about 100,000 tonnes. The stockpile has also been discreetly tarped. Some of the tarp was peeled back to accommodate this load, but it will soon be covered up again after the stockpile is "groomed" to prevent erosion or slippage. 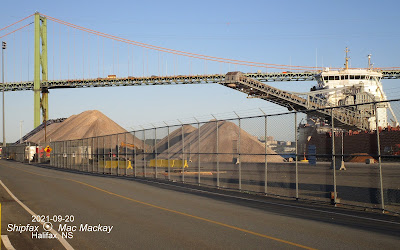 Today's contribution to the stockpile was in two parts. Some was added to the existing mountain in the background, and a smaller mountain was created in the foreground.

The salt will be trucked away bit by bit to salt depots or directly as needed during the winter.

I have posted photos of the Trillium class ship Baie St.Paul many times, but never explained the significance of the ship's name. CSL's roots are in the Richelieu  + Ontario Navigation Co, formed in 1875. They operated a fleet of passenger ships with some freight carrying capacity. As the name implies they were active in the upper reaches of the St. Lawrence River and into the Great Lakes, but they also developed passenger services on the lower St. Lawrence River. When CSL was formed in 1913 by combining a number of smaller lines, including R+O, it soon became a powerhouse of cargo shipping too.

Among the ports the R+O and then the CSL served on the Lower St.Lawrence were several on the north shore below Quebec City, that had no rail or road service. Among these was Baie St. Paul, about forty miles downstream from Quebec City. An important agricultural outpost it had a very shallow harbour, that dried out at low tide, and large ships could not dock there. Instead they landed at a "cage" or man-made structure out in the bay and people and freight were ferried to shore in small craft. Baie St.Paul became an important regional centre once the railroad and roads arrived, and was abandoned as a port. However it is noted as the ancestral home of the Simard family, founders of the many industrial enterprises in Sorel, QC. One has to wonder if they would ever have left the village if it had not been for the R+O / CSL. 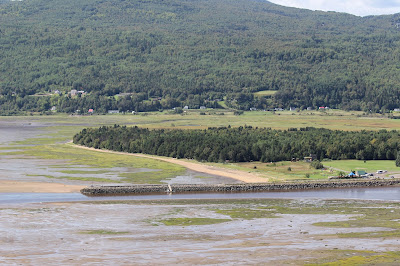 The Baie St.Paul wharf is not accessible to large ships.

The scenery around Baie St.Paul is quite spectacular, and the area has become a home for artists and has numerous art galleries. 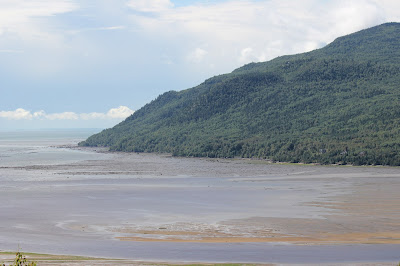 This photo could be stitched to the previous one to form a panorama, but would lose its detail.

CSL has named several of its ships for St.Lawrence north shore towns that it has served, and some more than once. Included in the list are Murray Bay and Tadoussac where CSL also operated resort hotels in connection with its "white ship" Saguenay River cruises, and Baie-Comeau, served only by its cargo ships.