The Idiot Factor I refer to is a non-scientific measurement which operates in direct proportion to the number of Personal Water Craft. The more PWC's - the more idiots. However there is an "escalator clause" which increases the ratio close to 1:1 as relates to rental operations. Apparently anyone with a credit card can rent a PWC on Halifax harbour and are thus entitled to risk their own and other's lives with impunity.

Hardly a day goes by tat I don't see someone taking an unnecessary chance with one of these craft. Today took the cake however as HMCS Montreal had to warn off several of these pests with whistle signals - not once, not twice, but three times. 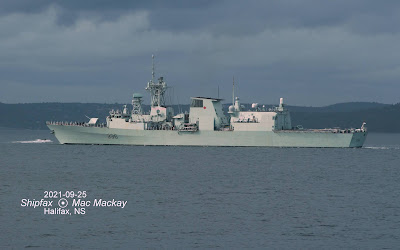 The frigate was exercising in Bedford Basin when it was "swarmed" by three PWCs, cutting close in under the ship's bows. Certainly a mindless maneuver, even if the ship was operating at slow speed. And of course there was no means of identifying the operators  - except by someone like me who took pictures.
(They should be equipped with GPS trackers like those silly road scooters that are also heavy on Idiot Factor.) 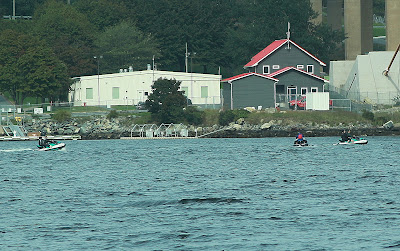