The Richmond Terminals area, Piers 9 to 9C, at the extreme north end of the harbour, are not highly active parts of the waterfront these days. Of the three large transit sheds, only one remains in use as such. The Pier 9 shed (once a Volvo assembly plant) is now used as a warehouse by Halifax Shipyard. The Pier 9A shed is now the home to IT International Telecom and does see some ships transferring specialized cargo including cable or undergoing refit.

Only the Pier 9B shed is used for freight. Lately it has been used to transfer cargo from rail car to container (mostly paper products as far as I can tell) and stainless steel wire for tire manufacturing. 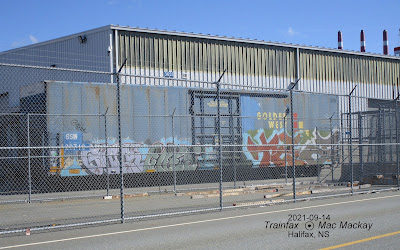 The extra height boxcar is dedicated to paper transport, and is a rare Golden West reporting mark for Southern Pacific. Note the three Nova Scotia Power smoke stacks peeking above the roof. They are from the company's Tufts Cove generating station, which now burns natural gas, but was built for coal and oil

The open Pier 9C was recently rebuilt and provides a hard surfaced open area, which has has seen a variety of uses for project or bulk cargoes such as coal, and is now storing salt (see recent posts), but was also used as an offshore oil and gas service base.

Before the most recent rebuild, Pier 9C was a large gravel surfaced open shoreline. It had been used to store bulk coal, seen here in 2004, but was mostly used for trailer storage.

Although the entire Pier 9B, 9C area may  look underutlized, it is a useful resource for odd cargoes, and a good place to tie up ships for repairs or short term layups. Oceanex Sanderling was there a week ago for repairs.

There is also the rarely used "Marine Terminal" at Pier 9 where a pipeline runs up to Wilson's Fuels storage tanks on Barrington Street. Originally Petrofina tanks, they have been used infrequently recently to receive fuel from Newfoundland, and to refuel some ships. Wilson's have sold the terminal and storage facility to Couche-Tard along with its Wilson's gas stations in the region, so it remains to be seen what the future will bring for the terminal. 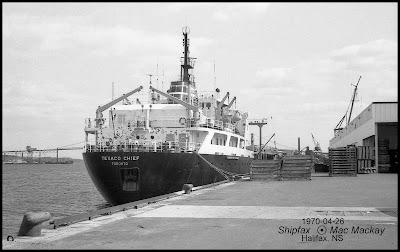 In 1970 the tanker Texaco Chief delivered cargo to Petrofina via the pipeline from Pier 9 to the Barrington Street Marine Terminal. At the time, the shed to the right was a Volvo car assembly plant. 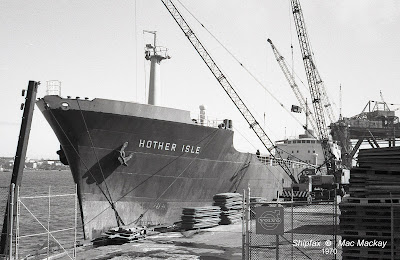 Volvo received crated and palletized car components from Sweden via early container ships (converted cargo ships). They were unloaded by shore cranes. This arrangement was discontinued when Atlantic Container Line began its container and RoRo service.
(In the background Halifax Shipyard is busy building an oil rig.)

Hother Isle was built in 1956 by Howaldswerke, Hamburg as the general cargo ship Christiane, and in 1969 was lengthened 12m and converted to carry containers. It lasted until 1986 under numerous owners and names.

The sheds were built in the early 1960s to take pressure off the Deepwater Piers sheds in the southend, where the container pier was to be built. There was also a planned service to Newfoundland using side door ships with forklift loading (which in the end was short lived.) Among the users of the sheds in the late 1960s and into the 1970s was Saguenay Shipping and various other South American shipping lines such as Compania Sud American de Vapores (Chile) , Cia Peruana de Vapores, Columbiana Internacional de Vapores, and perhaps others, using their own ships and various tramps. These were generally state of the art express general cargo ships of fine lines and are still regarded as the epitome of ship aesthetics. 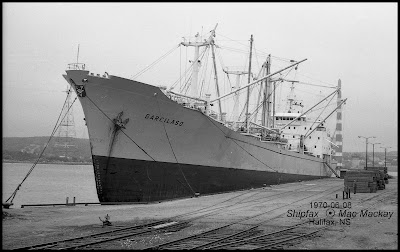 Garcilaso was built by Wartsila, Turku, Finland in 1969 for Cia Peruana de Vapores SA. It lasted until 1994 when broken up in Peru. 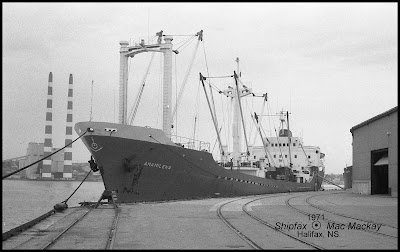 Anamilena from Colombiana Internacional de Vapores at Pier 9C in 1971 (by then there were two stacks at Tuft's Cove.)

Anamelina was built by Sociedad Espanola ce Construccion Naval  in Matagorda, Spain in 1968 but seems to have been repo'd in 1973. It served under six subsequent names and six flags until 2012 when its listing was dropped as "existence in doubt". 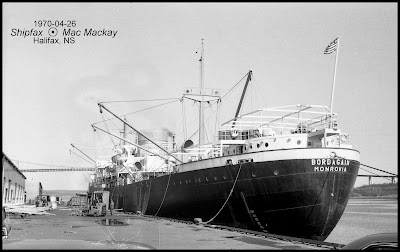 Bordagain loading - it was a messy job with slings and forklifts speeding around.
The A.Murray MacKay bridge in the background did not open officially until July 10, 1970.

Bordagain built in 1958 by Redhead, South Shields, was Baron Garioch for H.Hogarth until 1968. It lasted until 1982 when it was broken up in Bombay.

In the pre-container days when all cargo was "hand bombed" in slings, or on pallets, the Richmond Terminals were constantly busy with ships in port at all times. Cargo was transferred to / from rail or truck via the sheds from / to the ships and was very labour intensive.  It was the "last gasp" for conventional cargo ships that within a few years were relegated to third world service as container ships took over lucrative cargo work. 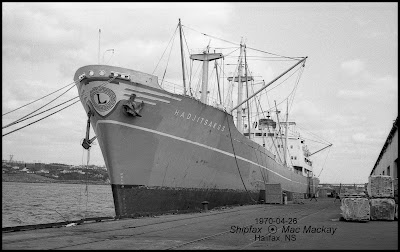 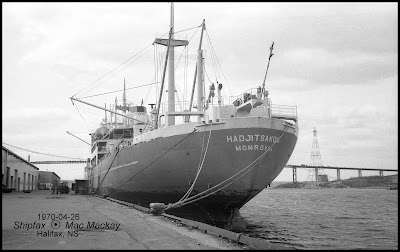 Hadjitsakos was another of the handsome general cargo ships.
AG Weser in Hamburg built the Hadjitsakos in 1956 for a Stavros G. Livanos company, and placed the corporate emblem on the bow. (See my September 15 post for a recent Livanos arrival in Halifax.) The ship was sold in 1972 but lasted until 1986 when it was scrapped in Aliaga.
The German ships tended to be the best looking: 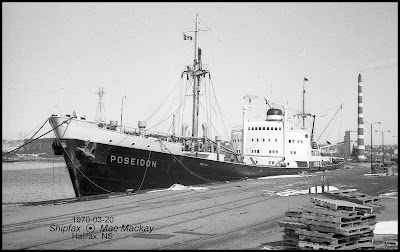 Back to 1970 again, with only one chimney at Tuft's Cove, Poseidon is tied up at Pier 9C, but appears to be idle.
Built in 1952 by Flender, Lubeck, Poseidon was sold in 1971 then resold in 1981. As Viki K its owners secretly unloaded the ship's cargo in Egypt  then scuttled the ship and claimed on the insurance for ship and cargo.
British built ships were also good looking, although slightly more conservative in design. 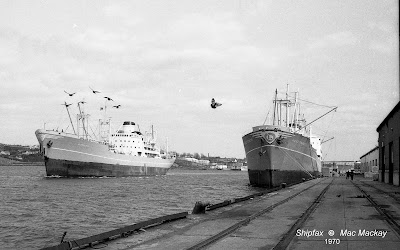 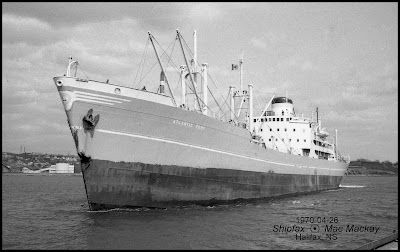 Atlantic Fury with an inexplicable hole in its bow, joins fleet mate Hadjitsakos at Pier 9B.
Atlantic Fury was a 1960 product of Furness Shipbuilding, Haverton Hill, when it was built as Duke of Mistra. Livanos acquired and renamed the ship in 1965 and sold it on in 1975. It went through several names and owners until scrapped in 1983 on Gadani Beach.
Just to conclude the story of the smoke stacks, Nova Scotia Power Corp built the first part of the generating station boilers in 1965, known as Tufts Cove #1. Tufts Cove #2 was completed in 1972 and Tufts Cove #3 in 1976. Each boiler has its own 500 foot high (152 meters) chimney. 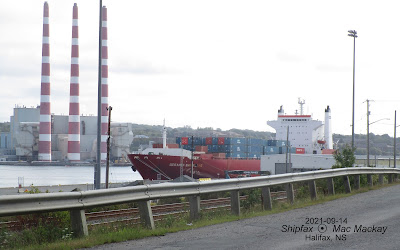 Oceanex Sanderling in port for repairs tied up at Pier 9B with the Tufts Cove generating station in the background. I usually attempt not to get the chimneys in the picture, but the red and white colours on ship and stacks were too good a target to miss. Even from a distance the chimneys tend to stand out. 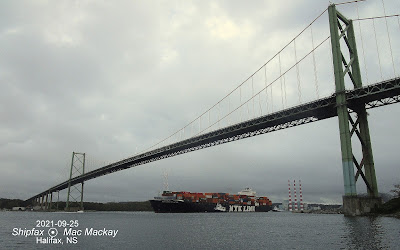 NYK Constellation arriving September 25 has passed Richmond Terminals and Tuft's Cove and is about to pass under the A.Murray MacKay bridge. The extra wide angle lens was needed to include the entire 1398 ft (426 meters) of the main span.
.