The PCTC (Pure Car and Truck Carrier) Morning Claire arrived yesterday morning at Autoport and after discharging automobiles it moved over to Pier 31 to offload non-automobile RoRo cargo. Unusually for a car carrier it spent the night in port and sailed at noon time today. 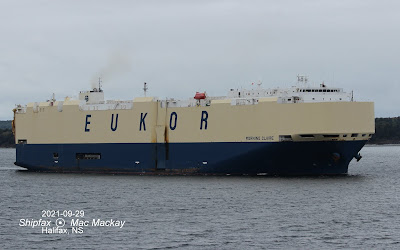 The ship was built by Shin Kurushima in Toyohashi, Japan in 2012. At 60,928 gt and 16,491 dwt it has a capacity of 6502 CEU.  The ship delivers cars built in "The land of morning calm" (Korea) and is part of an 80+ ship EUKOR fleet. Not only does South Korea compete with Japan in car construction, EUKOR competes with the big Japanese car carrier companies such as K-Line and NYK and MOL. It is therefore more than ironic that the ship was built in Japan.
Hyundai and Kia own only 20% of EUKOR, and ship all their products exclusively by Eukor. Wallenius and Wilhelmsen each own 40% of EUKOR, through various subsidiaries.
As a side note, the ship used the western channel outbound, and it was all I could do to keep it within the confines of my lens when it passed Ferguson's Cove.
.