The passing of Hurricane Larry, well offshore from Nova Scotia, but making a direct hit on the Avalon Peninsula of Newfoundland September 11 caused wild weather and sea conditions over a large area. Several ships steered wide of the storm, delaying their arrival or remained in port or returned to port.

Among the delayed arrivals was EM Kea on its regular run from Montreal to northern Europe on the Maersk./CMA CGM service. It would normally arrive in Halifax on a Saturday, but instead steamed slowly across the Gulf of St.Lawrence, missing some of the worst conditions, and arrived today (Sunday instead.) This did not pose a problem for PSA Halifax, with only one other ship to handle. 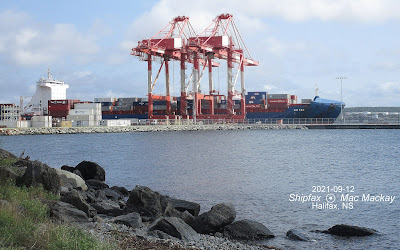 EM Kea at PSA Halifax pier 42 had two cranes while MSC Veronique at Pier 41 got three.

Opting to stay in port, Oceanex Sanderling did not make its usual Friday (September 10) departure for St.John's (scheduled arrival September 12) but instead remained in Halifax. After a time at anchor it moved to Pier 9B, perhaps to give the crew some shore leave. Update: Later reported the ship had a stack fire shortly after sailing October 10 and returned to port. 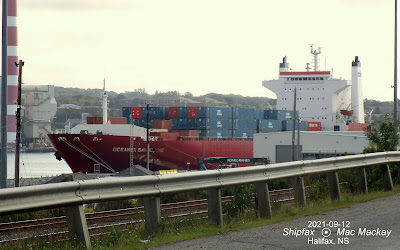 Conditions remain somewhat chaotic in Newfoundland with damage ashore and power outages, so no new departure date has been set for the ship, but also a  hint that the ship may be here for more than a day or two.
Returning to port, smaller naval vessels that were participating in Operation Cutlass Shield 2021, avoided the severe conditions, and instead exercised in Bedford Basin yesterday. This morning they sailed again, accompanied by the fishing trawler Patrick and William*, which appears to have been hired to work with the operation. HMCS Summerside and HMCS Moncton sailed while HMCS Kingston remained in Bedford Basin.

Lead by HMCS Montreal, the small flotilla sails out the main channel while the container ship MSC Maria Clara takes the western channel and hoots for some pleasure craft to clear the way.
MSC Maria Clara arrived to anchor in the lower harbour for Canadain Food Inspection Agency clearance. The ship, which has only recently been acquired as part of MSC's ship buying binge, was no doubt in Asian ports recently and needs to be inspected for Limantria Dispar larvae. No stranger to Halifax in its varied career, the ship deserves a post all of its own, which I will file later.
.
* Footnote
Patrick and William showed up in port September 3. 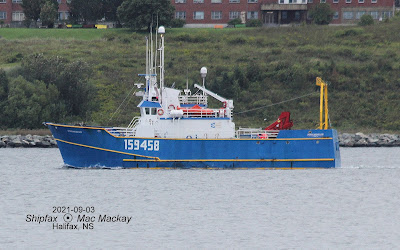 Built by Glovertown Marine Ltd in 2001 as Katrina Charlene it was renamed in 2019 by RS Marine Ltd of St.John's.