Where are the ships - Part 2

In partial answer to my September 18 post, wondering about the dearth of container ships in Halifax recently, there was some activity today, September 21.

MSC Weser, which arrived in Halifax September 5 put out to sea today for trials. It did not take long to confirm that whatever the problem had been, the ship was now fit for service and it soon returned to port. It tied up at Pier 41 and began to load (or re-load) cargo. 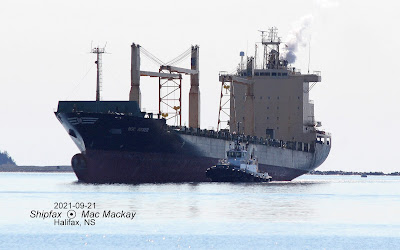 The ship will be re-joining MSC's Canada Gulf Bridge service. It was en route from Philadelphia to Montreal when it arrived here, and will now continue that voyage. It normally sails from Montreal to Corner Brook and Saint John then on to Freeport, Bahamas and Mexico. That service does not call in Halifax.
Since the ship was completely unloaded on its arrival in Halifax, it was in ballast for today's trials. Just what it may be loading now is a bit of a mystery. Presumably whatever cargo it had for Canada could have been forwarded by tuck and rail by now, and outbound cargo could also have been sent here. However the ship is due in Montreal September 25, sailing September 26.
Another Montreal-bound MSC ship anchored off Halifax September 19. MSC Shristi was en route from New York when it made a "hard left" and anchored offshore. 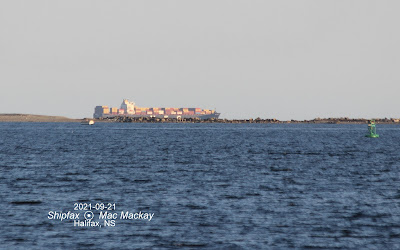 As seen at a distance from Halifax the ship appears to be reasonably well laden, but perhaps not fully loaded. It was due in Montreal September 21, but has since been removed from MSC schedules. It is now due in Halifax tomorrow, September 22.
Built as Venice Bridge in 2005 by Hyundai, Ulsan, it is a 54,519 gt, 64,989 dwt ship with a capacity of 4738 TEU including 374 reefers. In 2019 it was renamed Baltic East under MSC management and in 2020 became MSC Shristi.
Also coming to anchor off Halifax today is the Conti Contessa, a sizable ship on THE Alliance's EC5 route (Far Est / Med/ East Coast North America). Built as Ital Contessa by Samsung, Koje in 2006 it measures a hefty 90,449gt, 101,007 dwt with a considerable container capacity of 8084, including 700 reefers. It became Conti Contessa in 2019 under Conti11 Schiffahrts ownership and Niederelbe management. 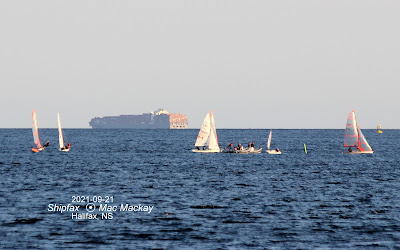 The ship appears to be heavily loaded, but is scheduled to transit the Narrows to Fairview Cove tomorrow, September 22. Based on its German ownership, it is likely filling some of HAPAG-Loyd's tonnage commitment to THE Alliance. (With ONE, Yang Ming and HMM.)
It is a large ship for the Narrows, so its airdraft must be minimized.
Also at the Fairview Cove terminal today was NYK Rumina, a 55,487 gt, 66,171 dwt ship built by Hyundai, Samho in 2010. 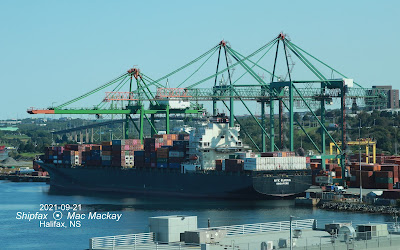 The ship has a capacity of 4922 TEU, including 330 reefers, and it is on THE Alliance's AL5 service, which connects western Europe with the west coast of North America. Its last European port is Antwerp and first and last North American port is Halifax, so it is in competition with several other lines on the North Atlantic. 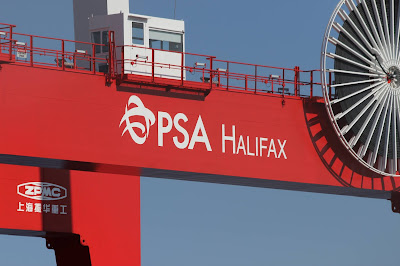 One prominent and highly reliable Halifax subscription news source stated earlier this week that PSA's takeover of the Cerescorp / NYK operation at Fairview Cove is a "done deal" awaiting regulatory approval from Competition Bureau Canada. No date was given for when the green light will be illuminated, but it will be interesting to see how it plays out if it is approved (which seems likely).
Major investment in equipment is needed at Fairview Cove, and is underway at PSA Halifax's Southend Container Terminal (formerly Halterm.)
Some shuffling of shipping lines is also expected, in part to ease road traffic issues in downtown Halifax. The city will be entering a period of extreme congestion when major re-developments of several roadways are set to begin soon. Keeping heavy truck traffic off the peninsula's streets (and onto trains) should be a top priority.
Halifax has so far avoided the congestion that is backlogging ports in many regions, but careful management of landside activity will be required. As one pundit stated recently "ports are a mess, but shipping company profits are at record highs."
.